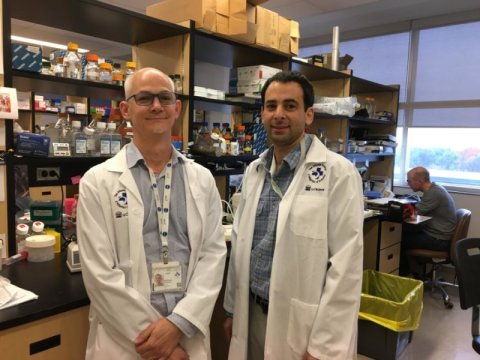 Researchers from The Ottawa Hospital and the University of Ottawa have developed a promising targeted strategy to treat chemotherapy-resistant acute myeloid leukemia (AML) and a diagnostic test to determine which AML patients would most likely benefit from this treatment. In a mouse model, the experimental treatment eliminated all signs of disease (complete remission) in 100 percent of animals, while those that received the standard treatment all died. The results are published in the leading cancer journal Cancer Discovery.

“We were blown away when we saw the results,” said senior author Dr. William Stanford, a senior scientist at The Ottawa Hospital and professor at the University of Ottawa. “If these findings hold up in clinical trials, we could have a new treatment for people who would almost certainly die of their disease today.”

AML is the most common type of leukemia in adults, killing more than 10,000 people each year in Canada and the U.S. It starts in blood stem cells found in the bone marrow. Chemotherapy has been the first-line treatment for more than 40 years. However, about a third of people do not respond initially, and another 40 to 50 percent relapse (their cancer comes back) after an initial response. Most of these people eventually die of their disease.

Dr. Stanford’s research focuses on a protein called MTF2, which places chemical tags near certain genes to help control their expression (called epigenetics). Dr. Stanford previously found that MTF2 plays a role in blood development. He then teamed up with Dr. Mitchell Sabloff, a hematologist at The Ottawa Hospital, to see if it also plays a role in blood cancer.

Using AML samples from patients treated at The Ottawa Hospital, the team found that people with normal MTF2 activity were three times more likely to be alive five years after their initial chemotherapy treatment than people with low MTF2 activity.

“Initially we thought that MTF2 could be an important biomarker to identify patients who might benefit from experimental therapies,” said Dr. Stanford. “But then we started thinking that if we could understand what MTF2 was doing, maybe we could use this information to develop a new treatment.”

Dr. Stanford and his colleagues then discovered that MTF2 helps to place a chemical tag near a gene called MDM2, which is known to help cells resist chemotherapy. In AML cells with normal MTF2, this tag lowers MDM2 levels and ensures that cells die when they are damaged by chemotherapy. On the other hand, AML cells with low MTF2 can’t put tags on MDM2 to decrease its expression. These cells keep on living and dividing even when exposed to high levels of chemotherapy.

Since drugs that block or inhibit MDM2 are already being tested in clinical trials for other types of cancer, the team tested these in mouse models of AML using cells derived from patients whose cancer was resistant to chemotherapy. Mice treated with the MDM2 inhibitors plus chemotherapy all survived until the experiment ended four months later, and had no evidence of cancer, while those treated with chemotherapy alone all died.

“The preclinical animal data is very encouraging,” said Dr. Caryn Ito, a senior investigator at The Ottawa Hospital who developed the mouse models and co-led the study. “Our dedicated team of basic and clinical researchers worked extremely hard on this project. We were totally surprised by the findings, which we hope to translate to the clinic soon.”

The researchers are now trying to obtain pharmaceutical-grade MDM2 inhibitors to conduct trials in people with AML at The Ottawa Hospital. They are also screening libraries of approved drugs to see if any of these can block MDM2. And they are working with a biotech company to develop a test to identify chemotherapy-resistant AML patients, who would respond to these kinds of drugs. They have also filed a patent related to their discovery.

“We still have a lot of research to do, but if this works it could make a difference for patients around the world,” said Dr. Sabloff, who is also an associate professor at the University of Ottawa, Director of The Ottawa Hospital’s Leukemia Program and the Co-Director of the hematology bio-bank at the hospital. “I want to thank the many patients at The Ottawa Hospital who have and continue to generously donate blood and bone marrow for this research.”

Materials provided by The Ottawa Hospital. Note: Content may be edited for style and length.