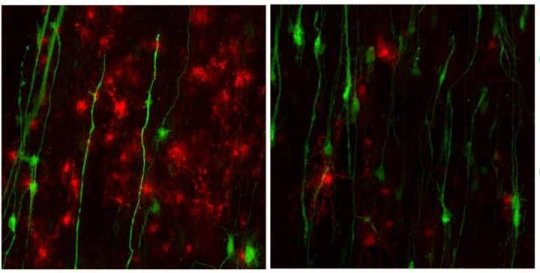 A City of Hope researcher has developed a stem cell model to assess possible treatments for a rare nervous system disorder that is in the same disease group as Alzheimer’s disease, Parkinson’s disease and amyotrophic lateral sclerosis (ALS).

The finding takes Yanhong Shi, Ph.D., senior author of the study, and her colleagues one step closer to finding a way to slow or treat Alzheimer’s disease and other neurodegenerative disorders.

The team studied Alexander disease because of its relatively simple pathology. In Alexander disease, a mutation in a glial cell called astrocytes inhibits a type of precursor cell that later becomes myelin, the fatty sheath that facilitates communication within the brain’s network.

“The bulk of ApoE4 resides in astrocytes; ApoE4 is a gene variant known for increasing the risk of Alzheimer’s disease,” said Shi, director of the Division of Stem Cell Biology at City of Hope. “So if we understand how astrocytes function, then we can develop therapies to treat Alexander disease and perhaps other diseases that involve astrocytes, such as Alzheimer’s and ALS.”

The study, published on Aug. 2 in the journal Cell Stem Cell, reports to be the first to overcome a significant challenge for understanding how mutations in a gene found in astrocytes called GFAP inhibits normal myelin distribution.

Previously, scientists were not able to create an animal model to observe the disease path. So, Shi, Li Li, lead author of the study and a graduate student in the Shi Lab, and their colleagues created a stem cell model that provides insight into the disease pathway of Alexander disease. They also created a platform for assessing therapeutic interventions for related neurodegenerative diseases.

The researchers created patient-derived stem cells that harbor a mutation in the GFAP gene. They did a side-by-side comparison with brains obtained from Alexander disease patients and noted that both models exhibit disease-associated protein deposits called Rosenthal fibers.

The researchers used CRIPSR/Cas9 gene editing to correct the GFAP mutation in diseased astrocytes and found that the correction of the GFAP mutation reduced disease-associated protein deposits. Next, they examined how Alexander disease develops using this newly discovered stem cell disease model.

In Alexander disease, astrocytes inhibit the growth of “oligodendrocyte progenitor cells,” precursor cells that later become myelin and speed up the brain’s communication network. By comparing the different genes expressed in the astrocytes derived from stem cells of Alexander disease patients and those of healthy controls, the researchers found that GFAP mutant astrocytes secrete the protein CHI3L1, a marker of neuroinflammation that suppresses neural development-related processes, including myelination.

Therapies that target CHI3L1 may be able to treat Alexander’s disease or leukodystrophic diseases that decrease myelin, Shi said.

“Although neurons have been in the spotlight for years, more studies are finding that astrocytes play a very important role in normal brain function and neurological disease,” Shi said. “Astrocytes make up a large proportion of the cells in the brain and are important in neuroinflammation. Chronic inflammation creates disease. The question is how to prevent it.”

Materials provided by City of Hope. Note: Content may be edited for style and length.