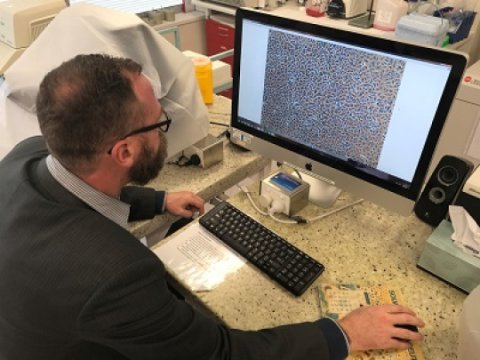 The fight against cystic fibrosis (CF) has taken a major step forward, with pioneering research by University of Adelaide scientists showing that cells causing the debilitating genetic disorder could be successfully replaced with healthy ones.

“There are 70,000 people worldwide living with CF for which there is currently no cure, and disease in the lungs is the major cause of poor health and a significantly shortened life span,” says Dr Nigel Farrow, a Post-Doctoral Research Fellow from the University of Adelaide’s Robinson Research Institute, who conducted the study alongside Associate Professor David Parsons head of the research team based in the Women’s and Children’s Hospital.

In Australia, one in every 2,500 babies has CF, and one in 25 people carry the defective gene. Even though carriers are not affected by the disorder, they may pass the gene to their children. If both parents are carriers, each of their children has a 1 in 4 chance of being born with the disorder.

“Our research which applies stem cell transplantation, involves harvesting adult stem cells from the lungs of CF patients, correcting them with gene therapy, and then reintroducing those cells back into the patient,” says Dr Farrow.

“The new transplanted adult stem cells pass on their healthy genes to their ‘daughter cells’ providing a constant means to replenish the airways with healthy cells, and thereby combatting the onset of cystic fibrosis airway disease,” he said.

Working in mouse airways, the group successfully tested their new transplantation method, using a marker gene in place of the corrective CF gene in initial studies.

“The key to these successful transplantations was our innovative method; we first eliminated the existing surface cells, which then created the space required to introduce the new cells,” says Dr Farrow.

CF affects a person’s lungs and digestive system causing a build-up of mucus that seriously impairs their breathing and significantly increases the chances of chest infections.

Patients such as Nathan Rae are required to undergo a range of regular therapies to help to alleviate the symptoms of CF.

“I have intensive daily physiotherapy to clear my airways, eat a nutritious high-fat, high-calorie diet with lots of extra salt and vitamins, and take drugs that help me digest my food,” says Nathan.

“Exercise is really important, but as I regularly get chest infections, I have frequent hospital admissions, which inhibits my ability to exercise as much as I’d like,” he says.

This pioneering research demonstrates that, in principle, human airway stem cells can be transplanted into the lining of the lungs.

“If we can perfect this technique, it will accelerate this exciting research which could significantly improve the lives of those living with cystic fibrosis and potentially combat this chronic life-limiting illness,” says Dr Farrow.