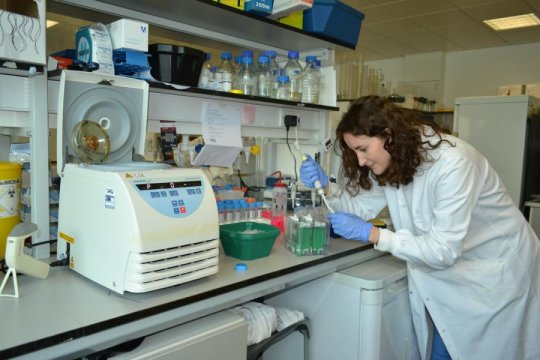 Our immune system is working every day to protect us from bacteria, viruses, and parasites, but it can also detect when our own cells are damaged.

Research led by Lancaster University has now discovered how skin cells alert the immune system, when their DNA is damaged in the absence of infection. This DNA damage can come from a variety of sources, such as the sun’s UV rays, chemical agents like cigarette smoke, or from genotoxic drugs used in chemotherapy.

There have been few studies carried out on the immediate effects of DNA damage on the immune response, and fewer still on the role that skin cells could play in this response. Skin is our primary barrier against the outside world, and is constantly exposed to viruses and bacteria, but also to UV light and environmental toxins.

The study, published in Molecular Cell, found that DNA damage can lead to an immune response similar to that observed during viral infection.

The scientists damaged the DNA in skin cells using the chemotherapy drug Etoposide, and found that the damage was detected by some of the proteins in the cell that also recognise DNA from viruses. The damaged skin cells produced immune messenger molecules such as interferons and other cytokines that usually alert the body to infections. While this response required many components of our anti-viral defences, it activated them in a different way, making use of the proteins that are responsible for repairing our DNA after damage.

Using CRISPR-Cas9 gene editing technology, researchers were able to modify skin cells to delete certain immune genes and determine their role in this pathway. Specifically, they focused on components of the DNA sensing pathway that our cells deploy to detect viruses. Our cells use the protein cGAS to recognise virus DNA in the cytoplasm. cGAS then activates the immune adaptor STING (STimulator of INterferon Genes), which switches on an anti-viral immune response. The scientists found that STING could be activated in a different way after DNA damage, even when cGAS was absent. This involved a DNA binding protein in the nucleus, IFI16, which could activate STING with help from DNA repair factors.

Lead author Dr. Leonie Unterholzner from Lancaster University said: “We have discovered a new way in which our cells can switch on an immune response in the skin. It is possible that our immune cells use this alarm system to detect damaged skin cells, and prevents them from becoming cancerous. This is a very exciting first step, but much more work needs to be done to find out how this discovery may be used for medical applications, for instance in cancer immunotherapy.”

The research was led by Lancaster University with funding from the Medical Research Council and North West Cancer Research, and collaboration from the University of St. Andrews, Trinity College Dublin, and Aarhus University.