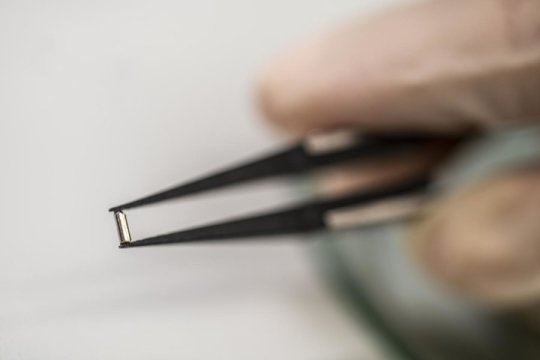 Houston Methodist scientists have developed a nanodevice to deliver immunotherapy without side effects to treat triple-negative breast cancer. Inserted straight into a tumor, this nanofluidic seed makes it possible to deliver a one-time, sustained-release dose that would eliminate the need for patients to undergo several IV treatments over time.

Invented by Alessandro Grattoni, Ph.D., chairman of the Department of Nanomedicine at the Houston Methodist Research Institute, this tiny device is smaller than a grain of rice and, once inserted inside a tumor, can deliver the medication little by little, gradually releasing the drug from its reservoir.

“With this research we are trying to establish a novel strategy to deliver immunotherapy straight into a tumor instead of delivering it to the whole body of a patient,” Grattoni said. “And we’re trying to understand whether delivering it this way would actually be more effective and have less side effects as compared to conventional immunotherapy, which today is given to the entire body of the patient.”

Grattoni and team are not alone in studying ways to administer immunotherapeutics intratumorally. What distinguishes his approach from others is the use of the implantable nanodevice that can be placed inside the tumor very accurately, with just one, simple procedure and with the ability to sustain the delivery of the immunotherapy over a prolonged period of time.

“Timing of the release may be extremely important,” said E. Brian Butler, M.D., chair of the Department of Radiation Oncology at Houston Methodist and Grattoni’s co-senior author on a recent paper in the Journal of Controlled Release. “These immunotherapy payloads Dr. Grattoni created come in a little metal device with nanochannels that release the medication at a constant rate in a controlled way.”

Grattoni, who also is the corresponding author, says that by providing sustained doses, their implant maintains an active level of the drug for extended periods of time. This would reduce the need for continual clinic visits, which are usually required for immunotherapy and other cancer treatments.

By contrast, most other methods currently under preclinical and clinical trials require multiple injections into the tumor and, in many instances, necessitate repeated invasive procedures to access it. Additionally, injecting drugs straight into a tumor as a single dose may not be very effective, as only a part of it will stay, with the rest being rapidly eliminated due to the high-pressure nature of a tumor’s microenvironment. Grattoni’s intratumoral sustained-delivery method prevents this from happening.

“We’re in the middle of an exciting time in medicine, because if we can get it to work, you decrease the toxicities to the patient,” Butler said. “This offers the opportunity of treating locally and getting the systemic response without all the side effects.”

Grattoni likens their device to an hourglass.

“Our implant releases the drug in a constant manner until the entire amount is completely gone from the reservoir,” Grattoni said. “Since it can deliver the immunotherapy by itself for weeks to potentially months, we would only need to place the device inside the tumor once and then the drug would be released autonomously for that long period of time.”

While this platform technology can be applied to many different types of cancer, they chose to work on triple-negative breast cancer, since there’s not currently a good therapeutic approach for treating patients that are affected by the disease.

Breast cancer is traditionally not considered immunogenic, which means it may not respond well to immunotherapy, but triple-negative breast cancer (TNBC) is more immunogenic than other breast cancer subtypes. This is another reason why the researchers chose to focus on it. They are trying to make TNBC more responsive to the treatment with their implant.

The next phase of their research, also in mice, will be to combine the device with radiation therapy to see if this approach can improve on the effectiveness currently achieved through systemic delivery of immunotherapy and not just equal it.

“Using Dr. Grattoni’s nanodevice in conjunction with our clinic, we hope to create a very robust immunological response, by putting the immunotherapy directly into the tumor, which is where all the information is,” Butler said. “This will allow us to possibly harness the full power of a person’s immune system to destroy the cancer, offering the opportunity to get the systemic response, while treating locally, without all the side effects.”

In addition to the sustained release system, Grattoni’s nanodevice serves as a fiducial marker to facilitate precise delivery for image-guided radiation. Their hope is that in combination with radiation therapy, this device would not only provide an alternative, but also help improve upon current immunotherapeutic approaches.

“We are hoping to go to patients within three years,” Grattoni said. “We would definitely improve on what is out there currently and what other groups are already studying.”

The work was supported by grants from Golfers Against Cancer and the Nancy Owens Breast Cancer Foundation, as well as start-up funds to Grattoni from Houston Methodist Research Institute.