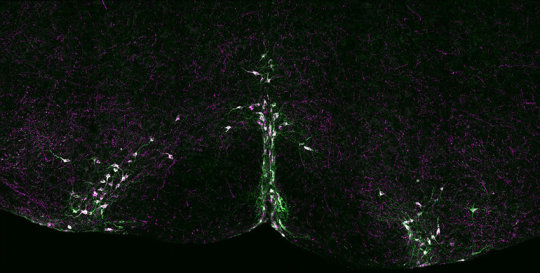 Scientists trying to identify the roots of sudden infant death syndrome (SIDS), the leading cause of death in U.S. infants between 1 month and 1 year old, have increasingly turned their attention to the neurotransmitter serotonin and the brain cells that produce it.

Studies have linked serotonin-producing neurons to the regulation of breathing, which may go awry in SIDS. In addition, tissue samples from SIDS infants often show abnormalities specifically in those neurons.

Now, a new study in mice suggests that abnormalities in serotonin-producing neurons do not simply accompany a subset of SIDS cases but could actually contribute to those premature deaths.

“If we can determine whether serotonin-producing neurons play an active and necessary role in regulating breathing, heart rate and the recovery response to apneas in young mouse pups, it could provide a plausible biological explanation for at least some SIDS cases,” said Susan Dymecki, professor of genetics at Harvard Medical School and senior author of the study.

“This possible explanation might provide some hope, even if minutely, for the profound grief experienced by families who have lost a child to SIDS, and may one day help researchers prevent SIDS altogether,” she said.

Normally, the brain coordinates the heart and lungs to provide a continuous flow of oxygen into the body and carbon dioxide out.

In conditions such as sleep apnea, when breathing temporarily stops, oxygen levels in cells can fall too low and carbon dioxide levels can rise too high. To restore healthy levels, the brain triggers a series of gasps and raises the heart rate, a process called autoresuscitation.

But heart rate monitor readings in some SIDS infants support the hypothesis that this fail-safe mechanism doesn’t always kick in, and that its failure can lead to SIDS.

Dymecki and colleagues set out to explore the role of serotonin-producing neurons in regulating autoresuscitation in week-old mice, which the researchers estimate are within the corresponding age window that conveys highest risk of SIDS in humans.

The researchers genetically modified the mice so their serotonin neurons would quickly and temporarily be inhibited in response to an injected chemical. Other neurons remained unaffected.

Setting up this inducible neuron perturbation technique in mouse pups and coupling it with the ability to measure respiratory and heart function was the key, said Dymecki.

“Although initially technically challenging, this novel approach allowed for precise brain cell manipulation and real-time measurement of cardiac and respiratory activity,” said Ryan Dosumu-Johnson, a graduate student in the Dymecki lab and first author of the paper.

The researchers then induced apneas in the mice.

Those with inhibited serotonin-producing neurons had weaker breathing recovery and more instances of sudden death in the face of apneas than mice with a normally functioning serotonin production system.

“These results indicate a vital role for serotonin neurons at an early age after birth,” said Dymecki.

To the researchers’ surprise, the heart rates in mice with inhibited serotonin neurons recovered normally, at least initially, even though their breathing was impaired.

“This uncoupling of the breathing and heart-rate recovery responses was unexpected,” said Dymecki. “It suggests that these two vital physiological responses — heart rate and breathing — could be more separable at the level of brain cells and circuits than previously anticipated, despite their interwoven physiology.”

Although further studies will be needed to uncover whether the same principles hold true in humans, the current findings support the theory that defects in the functioning of serotonin neurons can render infants more vulnerable to dying from apneas and other cardiorespiratory challenges, the authors said.