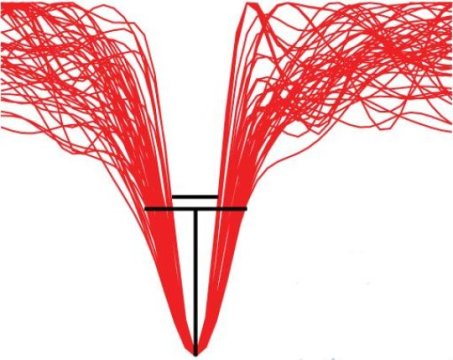 Some patients describe epileptic seizures like an earthquake from within, starting slow and growing without their control. To a brain researcher, seizures are an electrical firestorm of neuronal activation in the brain. Now, studies at Jefferson (Philadelphia University + Thomas Jefferson University), have shown that some types of seizure paradoxically begin with a hush: a spike in inhibition. Neurons that dampen neuronal activity may be responsible for starting the large-scale over-activation of a seizure.

“This is the first time to our knowledge that this phenomenon of inhibition at the start of a seizure has been observed in humans,” said senior author Shennan Weiss, MD, PhD, Assistant Professor of Neurology and Head of Thomas Jefferson Computational Epilepsy Laboratory at the Vickie & Jack Farber Institute for Neuroscience at Jefferson. “Such a shift in our thinking could change how we go about looking for new treatments for preventing epileptic seizures,” said Dr. Weiss, who also treats patients with the disease.

The research was published in the journal Annals of Neurology.

Neurologists have long held the belief that seizures begin as an imbalance of excitatory and inhibitory neurons that lead to the over-excitation, but it had never been proven experimentally. For the past 20 years or so, researchers working with animals have observed that a burst of inhibition often precedes seizure onset. “Since no one could observe the same in humans, many people assumed this observation was a quirk of drug-induced seizures in animals, and not applicable to humans,” said Dr. Weiss.

To tease apart the problem, Dr. Weiss and his team of computational biologists looked at data collected by neurosurgeon collaborators at Jefferson and the University of California at Los Angeles. As part of pre-surgery for patients with epilepsy, surgeons placed electrodes in the brain to determine the exact location of seizures onset. Using this data the researchers were able to capture 13 spontaneous seizures and measure impulses called action potentials produced by single excitatory and inhibitory neurons. They found that at the beginning of all the seizures, the inhibitory neurons produced bursts of action potentials prior to the excitatory neurons.

Patients often report experiencing an aura before the onset of an epileptic seizure. “We believe that patients experience dyscognition when the inhibitory neurons are activated at the beginning of the seizure,” said Dr. Weiss. “This period is characterized by confusion and an inability to talk or form coherent sentences.” About 10 seconds after the inhibition, the over-excitation spreads over the brain.

Dr. Weiss thinks that the burst of inhibitory activity might be an attempt to shut down overexcitement in the focal area of the brain. “It’s like when you pull the brakes too hard on a bike and you fly over the handlebars,” said Dr. Weiss.

There are many types of seizures, but the type described in this paper, the low-voltage fast (LVF) onset seizure, is the most common, and suggests that the results could potentially apply to a large number of seizures. The details will need to be worked out before it can be applied toward new treatments, but the results suggest that the biology of seizures in people may be different than expected, and that targeting inhibitory neurons could offer new avenues for treatment or seizure prevention.