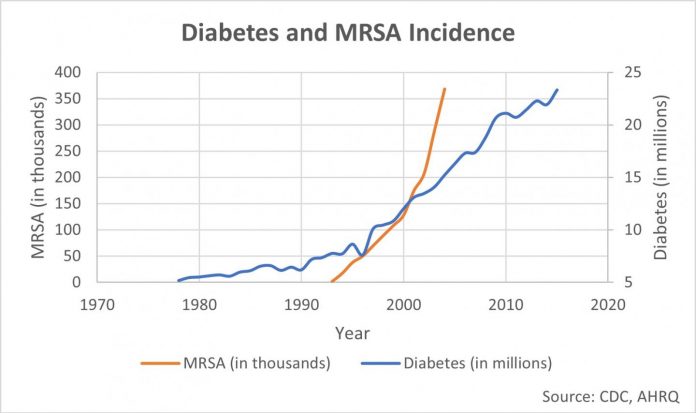 PITTSBURGH, Nov. 13, 2020 – The bodies of people with uncontrolled diabetes appear to be the perfect environment for a common type of superbug to thrive unchecked and do its worst damage, according to new research by University of Pittsburgh School of Medicine scientists.

The researchers report today in Science Advances that Staphylococcus aureus–a bacteria that often is resistant to antibiotics–thrives in glucose-rich diabetic conditions, which trigger it to activate some of its most virulent features. A lack of insulin prevents the immune system from responding to the infection.

“This explains why a wound or cut in a patient with diabetes really must be treated aggressively,” said senior author Anthony Richardson, Ph.D., associate professor in Pitt’s Department of Microbiology & Molecular Genetics. “The immune system needs help recognizing and clearing the infection before it’s able to take hold.”

Diabetes is a disease that occurs when the levels of sugar in the blood–measured as blood glucose–are too high. This happens in people who either do not produce enough insulin, a hormone that helps cells convert glucose into energy, or respond poorly to insulin in their blood. In the U.S., 11% of people have diabetes, and more than a third of all adults have pre-diabetes.

Among people with diabetes, up to a third develop diabetic foot ulcers, which are the most common reason for foot infection and leg amputation, according to the American Diabetes Association. S. aureus most often is associated with these types of invasive infections, especially in people with poorly controlled diabetes.

Rates of S. aureus infections and diabetes have grown in lockstep over the past three decades.

Previously, lead author Lance Thurlow, Ph.D., who conducted the research at Pitt and now is at the University of North Carolina at Chapel Hill, had shown that S. aureus had evolved an additional two “glucose transporters” on top of the two already common to most staphylococcal species. This gives S. aureus an advantage over other bacteria in making use of excess blood sugar to proliferate.

In this recent study, Richardson, Thurlow and the rest of the team experimented with diabetic and non-diabetic mice and strains of staphylococcus with and without the extra transporters.

Diabetic mice infected with strains of staphylococcus that didn’t have the extra glucose transporters had less invasive infections, though their immune systems were still slower to respond than those of their nondiabetic counterparts.

Knowing the mechanism that S. aureus uses to cause such devastating infections in people with diabetes could lead to treatments that capitalize on the bacteria’s hunger for glucose, tricking it into consuming a toxic analogue, said Richardson.

“But we also can’t lose sight of the need to prevent and control diabetes,” he added. “If we can keep people from developing diabetes and help people who have it to control their blood sugar, then S. aureus will have a much more difficult time causing such terrible infections.”

Additional co-authors of this publication are Amelia C. Stephens, B.S., and Kelly E. Hurley, B.S., both of Pitt.

To read this release online or share it, visit https://www.upmc.com/media/news/111320-richardson-mrsa-diabetes [when embargo lifts].

About the University of Pittsburgh School of Medicine

As one of the nation’s leading academic centers for biomedical research, the University of Pittsburgh School of Medicine integrates advanced technology with basic science across a broad range of disciplines in a continuous quest to harness the power of new knowledge and improve the human condition. Driven mainly by the School of Medicine and its affiliates, Pitt has ranked among the top 10 recipients of funding from the National Institutes of Health since 1998. In rankings recently released by the National Science Foundation, Pitt ranked fifth among all American universities in total federal science and engineering research and development support.

Likewise, the School of Medicine is equally committed to advancing the quality and strength of its medical and graduate education programs, for which it is recognized as an innovative leader, and to training highly skilled, compassionate clinicians and creative scientists well-equipped to engage in world-class research. The School of Medicine is the academic partner of UPMC, which has collaborated with the University to raise the standard of medical excellence in Pittsburgh and to position health care as a driving force behind the region’s economy. For more information about the School of Medicine, see http://www.medschool.pitt.edu.