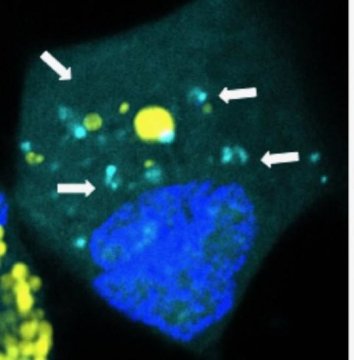 In a “proof of concept” study, scientists at Johns Hopkins Medicine say they have successfully delivered nano-size packets of genetic code called microRNAs to treat human brain tumors implanted in mice. The contents of the super-small containers were designed to target cancer stem cells, a kind of cellular “seed” that produces countless progeny and is a relentless barrier to ridding the brain of malignant cells.

Results of their experiments were published online June 21 in Nano Letters.

“Brain cancer is one of the most widely understood cancers in terms of its genetic makeup, but we have yet to develop a good treatment for it,” says John Laterra, M.D., Ph.D., professor of neurology, oncology and neuroscience at the Johns Hopkins University School of Medicine and a research scientist at the Kennedy Krieger Institute. “The resilience of cancer stem cells and the blood-brain barrier are major hurdles.”

Blood that enters the brain is filtered through a series of vessels that act as a protective barrier. But this blood-brain barrier blocks molecular medicines that have the potential to revolutionize brain cancer therapy by targeting cancer stem cells, says Laterra.

A case in point, Green says, is glioblastoma, the form of brain cancer that Arizona Sen. John McCain is battling, which often requires repeated surgeries. Doctors remove the brain tumor tissue that they can see, but the malignancy often returns quickly, says Laterra. Most patients with glioblastoma live less than two years after diagnosis.

Scientists have long suspected that cancer stem cells are at the root of what drives the return and spread of glioblastoma and other cancers. These stem cells give rise to other cancer cells and, if they evade the surgeon’s knife, can lead to an entirely new tumor.

Laterra and Green, who are members of the Johns Hopkins Kimmel Cancer Center, designed a way to efficiently deliver super-tiny packets of microRNAs into established brain tumors. The microRNAs target brain cancer stem cells to halt their capacity to propagate and sustain tumor growth.

The packets are made of biodegradable plastic similar to material used for surgical sutures and that degrades over time. They are 1,000 times smaller than the width of a human hair and typical of the size and shape of natural components that cells use to communicate. When cancer cells engulf the packets, they break apart and release their microRNA “payload” specifically where the microRNAs need to take action within the cancer cells.

Encased in the nanopacket are microRNAs that specifically bind to messenger RNAs linked to two genes: HMGA1 and DNMT, which function together to regulate gene expression programs in cells.

When microRNAs bind to these messenger RNAs, they block their protein-making abilities and turn off programs that drive the cancer cells’ stemlike characteristics. Without their stemlike properties, the cancer cells are more differentiated, they lose their capacity to propagate tumors, and they may be more susceptible to radiation and drugs.

For their experiments, the Johns Hopkins scientists implanted human glioblastoma cells into 18 mice. To mimic the clinical challenge of treating an existing tumor, the scientists waited 45 days before treating the animals to be sure they had well-formed tumors. Half of the animals received infusions of the nanopackets containing active microRNAs directly into their brain tumors, and the other half received nanopackets containing inactive microRNAs. To isolate the effect of the nanoparticles, the scientists used mice that were bred without immune system T-cells that target cancer cells.

All of the control mice had large tumors in their brains when they died. Four of the mice that received active microRNAs and lived to 133 days had no tumors, and two had small ones.

Green says that many genetic medicines are designed to target one gene. The type of nanoparticles the Johns Hopkins team used in this study can encapsulate multiple types of microRNAs to target multiple gene networks.

When the brain cancer stem cells internalize the nanoparticle and transition to a non-stem-cell state, Laterra says, clinicians could exploit that condition, and give radiation or other drugs to kill the now-vulnerable cells.

Green and Laterra say the nanoparticles in their study are able to permeate the entire tumor because rodent brains are small. Humans, with bigger brains, may need a pump and catheter to funnel nanoparticles throughout the brain.

The Johns Hopkins team is working to scale up development of its nanoparticles and standardize their stability and quality before applying for permission to begin clinical trials on people.

The research team has filed for a patent for part of the technology used in this research.