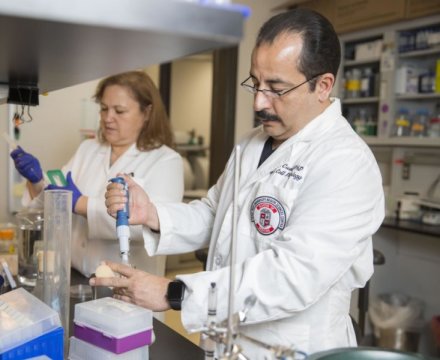 For the first time ever, researchers at the Texas Tech University Health Sciences Center (TTUHSC) have identified a specific amino acid residue that is responsible for inverting the communication between the opening of the activation gate and the inactivation of a potassium channel’s selectivity filter. The study was published in the Proceedings of the National Academy of Sciences (PNAS) April issue.

Luis G. Cuello, Ph.D., associate professor in the TTUHSC Department of Cell Physiology and Molecular Biophysics and director of the Core Facility Laboratory of the Center for Membrane Protein Research, said his research team was able to reverse the way potassium channels work from bacteria to human.

Potassium channels are extremely specialized proteins that are embedded in a membrane that is surrounding any living cell. By closing and opening a narrow constriction known as the activation gate, they control the transport of potassium ions in and out of the cell. The selectivity filter of potassium channels is the region within the protein structure in charge of the selective discrimination between potassium and sodium ions, which are about the same size. Cuello said this area of the protein procures a passage that perfectly fits potassium ions but is incapable to accommodate sodium ions, which makes it “selective” for potassium ions. The filter also can act as a secondary gate in series to the activation gate.

Potassium channels are proteins that are made of amino acid residues. A THREONINE is one of the 20 different amino acid residues that a cell uses to build a protein molecule. Cuello’s lab identified a Threonine residue (Threonine 75) as a crucial player that communicates the opening of the activation to the channel selectivity filter.

Allosteric coupling refers to the communication between two regions within a protein structure. Many therapeutic drugs bind to a specific site within the protein structure (binding site) and produce an effect somewhere else within the protein (effector site). Identifying the network of the amino acid residues that proteins use to couple two distant sites is an important step toward understanding at the atomic level how proteins regulate all the physiological aspects within the human body.

“With this study, we gain unprecedented knowledge and control over these types of channels,” Cuello said. “By developing a better understanding and exerting an unparalleled control of these type of molecules, we are paving the road toward the smart-design and synthesis of novel and safer therapeutic drugs to correct illnesses associated to with the dysfunction of potassium channels.”