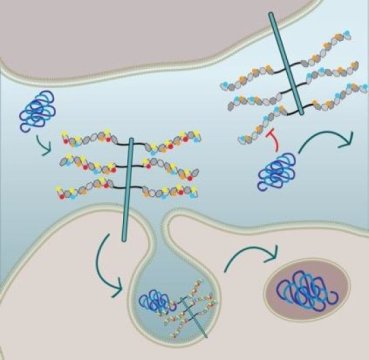 Vampires can turn humans into vampires, but to enter a human’s house, they must be invited in. Researchers at the UT Southwestern Medical Center, writing in the Journal of Biological Chemistry, have uncovered details of how cells invite inside corrupted proteins that can turn normal proteins corrupt, leading to neurodegenerative diseases such as Alzheimer’s and Parkinson’s diseases. Understanding the molecular details of how these proteins spread from cell to cell could lead to therapies to halt disease progression.

Alzheimer’s and Parkinson’s are associated with particular proteins in the brain misfolding, aggregating, and inducing normal proteins to misfold and aggregate. Marc Diamond’s group at UT Southwestern discovered in 2013 that to enter new cells and propagate misfolding, the disease-associated proteins tau, alpha-synuclein and amyloid-beta must bind to a type of sugar-protein molecule called heparan sulfate proteoglycan (HSPG) on the cell’s surface. This binding triggers the cell to bring the corrupted protein inside. In the new study, the group sought to understand more about how this process worked.

“The question was, how specific is this (process)? Or is it not specific at all?” asked Barbara Stopschinski, the physician and researcher in Diamond’s lab who oversaw the new work. What were the details of the chemical communication between HSPG and tau that triggered tau’s entry into the cells? And was this process different for alpha-synuclein (associated with Parkinson’s disease), amyloid-beta and tau (both associated with Alzheimer’s disease)?

She found that misfolded tau could enter cells through only a very specifically decorated and modified HSPG. Amyloid-beta and alpha-synuclein, on the other hand, were more flexible in the kinds of sulfate moieties that triggered their uptake. Furthermore, Stopschinski identified the enzymes in the cells that created particular sulfation patterns in HSPGs. When these enzymes were removed, misfolded tau was no longer taken up into cells, presumably because HSPG sugar decorations and sulfation patterns changed, meaning misfolded tau no longer knew the molecular password.

The team now wants to understand whether these processes work the same way in the brain as they do in cultures of brain cells. Diamond hopes that understanding how corrupted proteins move between brain cells will lead to ways of stopping them.

“There’s something very remarkable about how efficiently a cell will take up these aggregates, bring them inside and use them to make more,” Diamond said. “This knowledge has important implications for our understanding how neurodegenerative diseases get worse over time. Because we have identified specific enzymes that can be inhibited to block this process, this could lead to new therapies.”

Materials provided by American Society for Biochemistry and Molecular Biology. Note: Content may be edited for style and length.