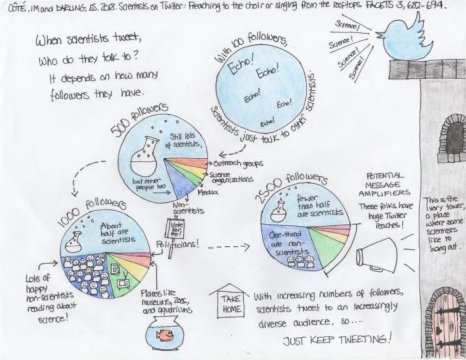 Isabelle Côté is an SFU professor of marine ecology and conservation and an active science communicator whose prime social media platform is Twitter.

Côté, who has cultivated more than 5,800 followers since she began tweeting in 2012, recently became curious about who her followers are.

“I wanted to know if my followers are mainly scientists or non-scientists — in other words was I preaching to the choir or singing from the rooftops?” she says.

Côté and collaborator Emily Darling set out to find the answer by analyzing the active Twitter accounts of more than 100 ecology and evolutionary biology faculty members at 85 institutions across 11 countries.

Their methodology included categorizing followers as either “inreach” if they were academics, scientists and conservation agencies and donors; or “outreach” if they were science educators, journalists, the general public, politicians and government agencies.

Twitter and other forms of social media provide scientists with a potential way to share their research with the general public and, importantly, decision- and policy-makers. Côté says public pressure can be a pathway to drive change at a higher level. However, she notes that while social media is an asset, it is “not likely an effective replacement for the more direct science-to-policy outreach that many scientists are now engaging in, such as testifying in front of special governmental committees, directly contacting decision-makers, etc.”

Further, even with greater diversity and reach of followers, the authors concede there are still no guarantees that Twitter messages will be read or understood. Côté cites evidence that people selectively read what fits with their perception of the world, that changing followers’ minds about deeply held beliefs is challenging.

“While Twitter is emerging as a medium of choice for scientists, studies have shown that less than 40 per cent of academic scientists use the platform,” says Côté.

“There’s clearly a lot of room for scientists to build a social media presence and increase their scientific outreach. Our results provide scientists with clear evidence that social media can be used as a first step to disseminate scientific messages well beyond the ivory tower.”