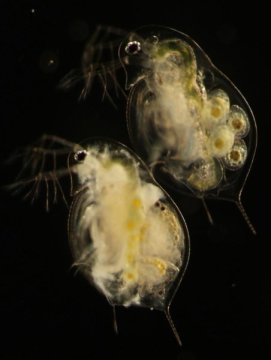 New research from Indiana University suggests that computer models used to predict the spread of epidemics from climate change — such as crop blights or disease outbreaks — may not take into account an important factor in predicting their severity.

A study recently published in the journal Ecology has found that pathogens that grow inside organisms at higher temperatures produce offspring that cause higher rates of infection compared to pathogens that grow inside organisms at lower temperatures. This suggests that climate can cause an “echo effect” in future pathogens, ultimately making them more infectious.

“It’s well known that environment can affect offspring across generations in plants and animals,” said Spencer Hall, a professor in the IU Bloomington College of Arts and Sciences’ Department of Biology, who is senior author on the study. “This study is one of the first to suggest that similar cross-generational effects occur in parasites and pathogens.”

The work was led by Marta Strecker Shocket, a Ph.D. student in Hall’s lab at the time of the study. Hall is also a member of the Environment Resilience Institute at IU, part of the IU Prepared for Environmental Change Grand Challenge.

“If past environmental conditions impact the frequency or severity of future infections, then current climate models are not taking an important factor into consideration when predicting threats from climate change,” said Shocket, who is now a postdoctoral researcher at Stanford University. “This might include threats to animals, plants and people.”

The researchers’ analysis draws in part upon research in water fleas conducted at three freshwater lakes in southern Indiana where Hall’s lab has collected samples since 2009. Located on the site of a former coal mine in Green-Sullivan State Forest in Linton, Indiana, the lakes are known locally as Lake Gambill, Lake Clear and Lake Scott.

Water fleas, also known as Daphnia, are small crustaceans that contribute to the health of lakes by feeding on algae. Without these organisms to control algae, a lake can quickly degrade into a turgid brew that resembles pea soup.

Water fleas are susceptible to infection from a fungal pathogen called Metschnikowia, which reproduces inside water fleas as needle-like spores that multiply until they kill them and burst out of their bodies to infect the next generation. A single autumn can produce six to 10 generations of the spores, with up to 60 percent of water fleas infected at the epidemic’s peak.

For the study, Shocket conducted lab experiments that found that the fungus caused more infections when higher temperatures were observed in the previous generations of water fleas. She then conducted research in the field to compare the lab results against fresh lake samples collected in late autumn.

The analysis found that an increase of merely 6.5 degrees Fahrenheit caused the fungal spores to become two to five times more likely to infect a new host.

Shocket said additional research is needed to explore these effects in other pathogen systems, especially since they could have an impact on agriculture. This is because the effect of climate across generations in parasites is more likely to have an impact on cold-blooded host organisms, such as crop plants or the insects that eat them.

The study also features mathematical methods to predict the effect of temperature changes on spore infectiousness across generations. Hall said the principles behind these models could potentially enhance other simulations that draw upon many factors to predict disease outbreaks.

“The translation of observational data into computational models is important in the field of ecology since nature is so messy,” he added. “The refinement of the algorithms to predict risks from climate is a crucial step in our ability to prepare for environmental change.”

Other authors on the paper are IU Ph.D. student Jason Walsman; Andrew Sickbert, an IU undergraduate at the time of the study; and Alexander Strauss and Jessica Hite, IU Ph.D. students at the time of the study. Additional contributors are Meghan Duffy of the University of Michigan and Carla Cáceres of the University of Illinois.

The Prepared for Environmental Change Grand Challenge brings together a broad, bipartisan coalition of government, business, nonprofit and community leaders to help Indiana better prepare for the challenges that environmental change brings to our economy, health and livelihood. Announced in May 2017, it is the second initiative to be funded as part of the Indiana University Grand Challenges program.

This study was supported in part by the National Science Foundation and Environmental Protection Agency.