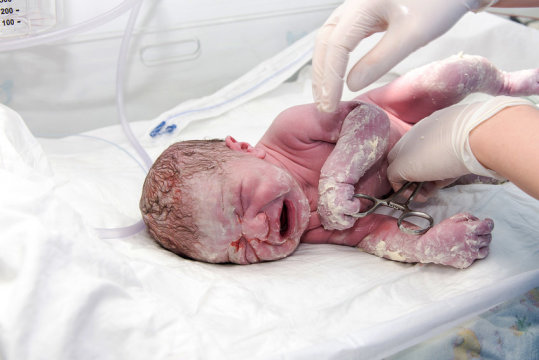 Researchers from the Department of Paediatrics and Wellcome Centre for Integrative Neuroimaging at the University of Oxford, UK, have identified the neural network that helps control babies’ brain activity in response to pain in a similar way to adults.

Their findings build on their previous study from 2015, which revealed that newborns experience pain like adults. Both papers are published in the journal eLife.

“In our previous work, we used an imaging technique called functional Magnetic Resonance Imaging, or fMRI, to show that pain-related brain activity in newborn infants is similar to that observed in adults,” says senior author Rebeccah Slater, Professor of Paediatric Neuroscience at the University of Oxford. “We wanted to expand on this by investigating whether the functional network connectivity strength across the descending pain modulatory system — DPMS — in infants influences the magnitude of this brain activity.”

The DPMS is a network of brain regions which function together to regulate both sensory input to the central nervous system and behavioural responses to pain. To study the network’s influence on babies’ brain activity in response to pain, Slater and her team analysed fMRI data from 13 newborns, who were on average four days old and had been recruited from the Maternity Unit at the John Radcliffe Hospital, Oxford.

In an identical study design to that of the previous work, the babies, accompanied by parents and clinical staff, were placed in an MRI scanner. Their brains were scanned as they were ‘poked’ lightly on the bottom of their feet with a special retracting rod. The scans showed that greater functional network connectivity across the DPMS led to lower brain activity in response to the stimulus, suggesting that the network can influence the magnitude of pain-related brain activity in babies.

“In adults, greater activity in brain regions within the DPMS network, prior to a painful sensation, are coupled with lower behavioural pain reports,” says first author Sezgi Goksan, Postdoctoral Researcher at the University of Oxford and Wellcome Centre for Integrative Neuroimaging. “With this in mind, a possible interpretation of our results is that when regions within the DPMS are more strongly functionally connected in infants, they have a greater ability to regulate their pain experience and dampen the magnitude of their brain activity in response to stimuli — again in a similar way to adults.”

Goksan adds that, to understand how the DPMS develops during early life, and how it is influenced by early-life experiences, further investigation of the network is required in both younger preterm infants and older infants.

“It has, for example, been suggested that abnormal development of DPMS function in early life may lead to long-term vulnerability towards chronic pain states,” she says. “It would be interesting to study this further, partly as a way to explore what avenues might be open for developing effective interventions in future.”