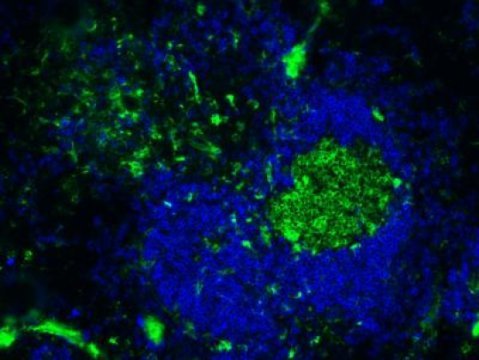 A new MDC study may resolve a decades-old debate in immunology: A team led by Prof. Klaus Rajewsky reports in Science that distinct progenitor cells are not required for the development of B1 cells. Instead, the team’s experiments show that B1-typical B-cell receptor can reprogram B2 cells into B1 cells, suggesting that B1 cells emerge as a consequence of their special B-cell receptors.

In the fight against diseases, one thing is absolutely vital: B-cells. These particular cells, which belong to a class of white blood cells called lymphocytes, are the only cells in the immune system capable of making antibodies. The Y-shaped proteins latch onto foreign structures such as bacteria or viruses, thus marking them as intruders for elimination by phagocytes and other immune cells.

There are two types of B cells. B2 cells, which make up the largest portion of the white blood cells in the body, mainly circulate in the blood and in the lymphoid organs such as the thymus, spleen, lymph nodes, and bone marrow. B1 cells, on the other hand, are mainly present in the peritoneal and pleural cavities, and hence in the areas around the intestinal tract and the lungs. They respond to a wide range of foreign proteins, called antigens, but also to some of the body’s own antigens — and in a different manner than the highly specialized B2 cells.

B1 cells constitute the majority of all B lymphocytes in newborns, but in adults the proportion of B1 cells drops to only a few percent. This is one of the reasons why B1 cells are considered carriers of natural immunity — i.e. the innate immune system — while B2 cells are mainly responsible for adaptive immunity, which emerges, for example, after an infection or a vaccination.

For decades, immunologists have debated the origin of B cells

Until now, it was unclear how the different types of B cells developed. “Some immunologists think B1 and B2 cells emerge from different progenitor cells,” says Dr. Robin Graf, one of the lead authors of the Science article and a member of the Immune Regulation and Cancer research group at the Max Delbrück Center for Molecular Medicine (MDC) in Berlin, which is headed by Prof. Klaus Rajewsky. “Other immunologists believe special autoreactive B-cell receptors trigger the formation of B1 cells.”

The new study, in which also other scientists from Rajewsky’s group who were at the time in Cologne and Boston played a major role, now provides clear evidence for the validity of the second hypothesis. “We replaced the B-cell receptor in mature B2 cells with a B1-typical B-cell receptor, which is found in nature only on B1 cells,” explains Graf.

The manipulated B2 cells assumed the properties of B1 cells

This procedure transformed the B2 cells into B1 cells. “We were able to show that the cells acquired the B1-typical surface markers,” reports Graf. The manipulated B2 lymphocytes also took on the functional properties of B1 lymphocytes. “When we transplanted them into mice, they were homing to those parts of the body where B1 cells are naturally found,” says the MDC researcher.

In addition, the cells began to spontaneously produce antibodies. “That’s also a typical feature of B1 cells,” explains Graf. What’s more, once the B1-typical receptor was expressed on the B2 lymphocytes, the cells started to multiply in great numbers over a period of one to two weeks. This strikingly resembles the natural development of B1 cells at early stages — a process that has barely been studied.

The end to a longstanding debate is in sight

Later in the study, Graf measured the activity of thousands of genes in the manipulated B2 cells. “Here we found that the same genes were active in these cells as in normal B1 cells,” reports the scientist.

Graf expects that the new study will convince immunologists that B1 cells emerge as a consequence of the specificity of their B-cell receptors.