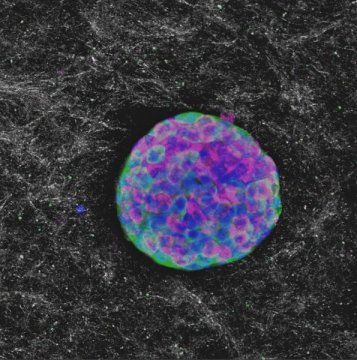 What if instead of daily insulin injections or wearing pumps, just getting a shot every few months could reverse Type 1 diabetes for you — or your dog?

The Trojan horse, in this case, would be collagen, a protein that the body already makes for building muscles, bones, skin and blood vessels. A collagen formulation mixed with pancreatic cells, developed by Purdue University researchers in collaboration with the Indiana University School of Medicine, is the first minimally invasive therapy to successfully reverse Type 1 diabetes within 24 hours and maintain insulin independence for at least 90 days, a pre-clinical animal study shows.

For diabetic pets, the next step is a pilot clinical study in dogs with naturally occurring Type 1 diabetes, which will be conducted in collaboration with Purdue’s College of Veterinary Medicine.

“We plan to account for differences from mouse to human by helping dogs first. This way, the dogs can inform us on how well the treatment might work in humans,” said Clarissa Hernandez Stephens, first author on the work and a graduate researcher in Purdue’s Weldon School of Biomedical Engineering. Findings appear in early view for a forthcoming issue of the American Journal of Physiology — Endocrinology and Metabolism.

“With giving my dog shots twice a day, I have to constantly be thinking about where I am and when I need to be home. It greatly affects my work and my personal life,” said Jan Goetz, owner of a diabetic dog named Lexi. “Not having to give these shots would mean freedom.”

Type 1 diabetes affects about one in every 100 companion animals in the U.S., including dogs and cats, and approximately 1.25 million American children and adults.

David Taylor, an Indiana resident, has struggled with Type 1 diabetes for almost 50 years.

“A Type 1 diabetes diagnosis was my 18th birthday present, and since that first insulin injection, managing diabetes has been my ‘other’ full time job,” Taylor said. “Treatment methods have improved enormously over 50 years, but they still permit no time off for the patient. Receiving an injection every few months would restore the near-normal life to me that I haven’t had as an adult — and I could retire from that full-time diabetes management job.”

Because diabetes in dogs happens similarly in humans, treatment has so far been largely the same: Both need their glucose to be monitored throughout the day and insulin to be administered after meals.

This also means that dogs and humans could potentially benefit from the same cure: A new set of pancreatic cells to replace the clusters of cells, called islets, that aren’t releasing insulin to monitor blood glucose levels.

Still, 20 years of research and clinical trials hasn’t produced an effective islet transplantation therapy because multiple donors are needed, the current method of delivering islets through the portal vein of the liver is too invasive and the human immune system tends to destroy a large percentage of transplanted islets.

Purdue researchers simply changed how the islets were packaged — first, within a solution containing collagen, and second, as an injection through the skin instead of all the way at the liver, saving patients from a nasty procedure.

“Traditionally, we transplant islets in the liver of the animal and never do it under the skin, in large part because the skin doesn’t have the blood flow that the liver has for transporting insulin released by islets. And there are a lot of immune cells in the skin, so chances of rejection are high,” said Raghu Mirmira, professor of pediatrics and medicine and director of the Diabetes Research Center at the Indiana University School of Medicine.

The team removed the need for transplanting in the liver by thoroughly mixing mouse islets, provided by Mirmira’s lab, with the collagen solution. Upon injection just under the skin, the solution solidifies, the body recognizes the collagen and supplies it with blood flow to exchange insulin and glucose.

“It’s minimally invasive; you don’t have to go to the operating room and have this infusion into the portal vein. It’s as easy as it comes, just like getting a shot,” said Sherry Voytik Harbin, Purdue professor of biomedical engineering and basic medical sciences.

The researchers tested the effects of the solution between mouse twins and non-twins to check for discrepancies. Initial studies showed if the mouse donor were a twin to the recipient, the diabetic mouse could go at least 90 days without needing another shot. If not twins, the mouse would have normal blood sugar levels for at least 40 days. Nearly all transplanted islets survived either scenario, removing the need for multiple donors to compensate for those killed off by the immune system.

As they transition to testing the formulation in naturally diabetic dogs, the researchers will explore the feasibility of transplanting pig islets or stem cells programmed to produce insulin, in hopes that either method will further increase donor availability.

The islet transplantation therapy might also have implications for better treating severe pancreatitis.