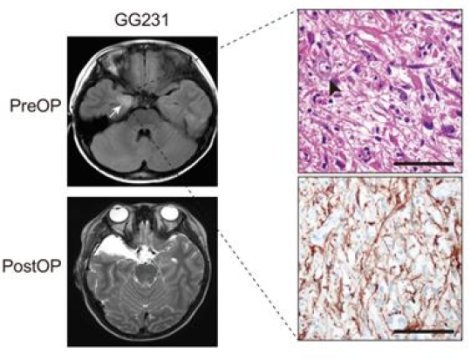 Pediatric brain tumors are characterized by frequent complications due to intractable epilepsy compared to adult brain tumors. However, the genetic cause of refractory epilepsy in pediatric brain tumors has not been elucidated yet, and it is difficult to treat patients because the tumors do not respond to existing antiepileptic drugs and debilitate children’s development.

A Korean research team led by Professor Jeong Ho Lee of the Graduate School of Medical Science and Engineering at the Korea Advanced Institute of Science and Technology (KAIST) has recently identified a neuronal BRAF somatic mutation that causes intrinsic epileptogenicity in pediatric brain tumors. Their research results were published online in Nature Medicine on September 17.

The research team studied patients’ tissue diagnosed with ganglioglioma (GG), one of the main causes of tumor-associated intractable epilepsy, and found that the BRAF V600E somatic mutation is involved in the development of neural stem cells by using deep DNA sequencing. This mutation was carried out in an animal model to reproduce the pathology of GG and to observe seizures to establish an animal model for the treatment of epileptic seizures caused by pediatric brain tumors.

Using immunohistochemical and transcriptome analysis, they realized that the BRAF V600E mutation that arose in early progenitor cells during embryonic brain formation led to the acquisition of intrinsic epileptogenic properties in neuronal lineage cells, whereas tumorigenic properties were attributed to a high proliferation of glial lineage cells exhibiting the mutation. Notably, researchers found that seizures in mice were significantly alleviated by intraventricular infusion of the BRAF V600E inhibitor, Vemurafenib, a clinical anticancer drug.

The authors said, “Our study offers the first direct evidence that the BRAF somatic mutation arising from neural stem cells plays a key role in epileptogenesis in the brain tumor. This study also showed a new therapeutic target for tumor-associated epileptic disorders.”

In collaboration with the KAIST startup company, SoVarGen, the research team is currently developing innovative therapeutics for epileptic seizures derived from pediatric brain tumors. This study was supported by the Suh Kyungbae Foundation (SUHF) and the Citizens United for Research in Epilepsy.