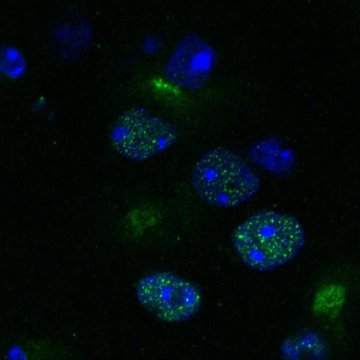 Scientists from the Medical Research Council (MRC) Laboratory of Molecular Biology, in Cambridge, UK, demonstrated the capabilities of the new system by identifying a molecule that could successfully target a phosphatase to reduce the accumulation of Huntington’s disease-associated proteins in the brains of mice.

The findings, published in Cell, could enable scientists to screen for drugs that can target specific phosphatases. Phosphatases are a type of enzyme that are a key part of signalling in cells — turning processes on and off. Most signalling starts with an activation signal — often when a type of enzyme called a kinase attaches a chemical tag, a phosphate group, to specific proteins to change their function. The signal is stopped by phosphatase enzymes, which cut off the phosphate group.

There are more than 200 types of phosphatases involved in many different processes in cells, so any drug must selectively target only the right one, otherwise it will produce serious side-effects or kill the cell.

Many drugs have been developed that can target specific kinases (such as anti-cancer drugs), but developing drugs that can specifically target particular phosphatases has proved difficult — because the functional part that cuts off phosphate groups is common to all phosphatases, so drugging one phosphatase inhibits hundreds of them and kills cells.

Dr Anne Bertolotti from the MRC Laboratory of Molecular Biology, who led the study, said: “For decades, with no way to selectively target phosphatases, research into them has lagged behind kinases and they’ve been described as undruggable. Our new system is only a first step, but we hope cracking this problem will stimulate phosphatase research and drug development.

“Targeting phosphatases — instead of kinases — is like targeting the brake, rather than the accelerator, on signals in cells. By inhibiting a phosphatase, we prolong a signalling event that has already been turned on, which may offer safer ways to specifically alter signalling in cells and help to create new drugs with fewer side-effects.”

The new system builds on previous work by the same scientists in which they created functional synthetic versions of phosphatase proteins.

These synthetic phosphatases are tethered to chips so they can be screened to find a molecule that binds to one type of phosphatase, but to none of the other types. The successful molecule is then tested in cells grown in a dish to check it is safe before beginning testing in mice.

The researchers used the system to discover a molecule that showed promise in a mouse model of Huntington’s disease.

Many neurodegenerative diseases, such as Alzheimer’s, Parkinson’s and Huntingdon’s diseases, feature misfolded proteins that accumulate in cells in the brain. The researchers hoped that slowing down a cell’s production of proteins could leave its ‘quality control machinery’ with more capacity to clear up the misfolded proteins.

In this study, they aimed to slow down the cell’s protein production machinery by targeting a specific phosphatase (designated ‘PPP1R15B’). They used their new drug discovery platform and found a molecule, called Raphin1, that targeted only that phosphatase.

When they tested Raphin1 in a mouse model of Huntington’s disease, they found it could cross into the brain where it reduced the accumulation of the disease-associated misfolded proteins in neurons. The scientists emphasise that this is early stage research and more work is needed to test if the drug will be safe or effective in humans.

Dr Anne Bertolotti said: “Since Huntington’s disease runs in families and can be diagnosed genetically, early diagnosis could provide what we hope is a window of opportunity to target the disease before symptoms appear. Our unique approach manipulates cells to slow down normal functions and give them a chance to clear up the misfolded proteins that are characteristic of Huntington’s. However, it will take some years before we know if this approach works in humans and is safe.”