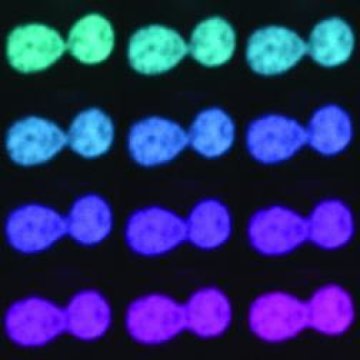 A team of physicists has devised a novel strategy that uses naturally occurring motions inside the human cell nucleus to measure the physical properties of the nucleus and its components. The method, which reveals that human nucleoli behave as liquid droplets, offers a potential new means for illuminating the physical properties of unhealthy cells, such as those linked to Alzheimer’s and Parkinson’s disease.

“This non-invasive strategy for measuring material properties in live cell nuclei can yield knowledge that is crucial for understanding the cell nucleus,” explains Alexandra Zidovska, an assistant professor of physics at New York University and the senior author of research, which appears in the latest issue of the journal Physical Review Letters (PRL). “We think that further development of this approach can have potentially large implications for both disease diagnosis and therapy.”

The study’s other researchers included Christina Caragine, an NYU doctoral student, and Shannon Haley, an undergraduate in NYU’s College of Arts and Science at the time of the work and now a doctoral student at the University of California at Berkeley.

Material properties of the cell nucleus and its constituents are critical for all cellular processes as they affect the most fundamental biological processes, such as the readout of the genetic information from the DNA molecule, its transcription to RNA, and its translation into proteins.

In particular, the viscosity of the nucleoplasm, or thickness of the solution inside the cell nucleus, influences how fast and how far molecules and organelles can travel inside the nucleus. Scientists believe these material properties change in a number of human diseases. However, measuring them has been a longstanding challenge — previous methods have relied on interventions that are stymied by a cell’s response to them.

In the PRL study, the researchers aimed to overcome this by using naturally occurring cellular dynamics and events inside the human cell nucleus to infer the physical properties of the nucleus and its constituents in live cells.

Specifically, they deployed two-color high-resolution spinning disc confocal microscopy, an imaging technique that records spatial and temporal behavior of living cells. Using this technique, they monitored changes in the shape of nucleoli, the largest structures inside the nucleus, during their fusion as well as minute fluctuations of their surface.

Remarkably, nucleolar fusion occurs a few times in the life time of a human cell, yet there is no way to predict when and where in the cell nucleus it will happen, Zidovska notes. Thus, to spot a fusion, she adds, one needs to look at the right place in the right time.

Zidovska and her team developed a new experimental procedure that captures these elusive fusion events.

This non-invasive approach avoided disrupting naturally occurring cellular activity while serving as a window into these dynamics. As a result, it detected aspects of the cell that were previously unknown.

In particular, the method showed that human nucleoli behave like liquid droplets. Moreover, it allowed the scientists to measure the physical properties of the surrounding nucleoplasm — an advance that indicated the nucleoplasm surrounding the nucleolar droplets has extremely high viscosity; in fact, it is 100 times higher than that of honey, which slows down the coalescence of the nucleolar droplets in healthy cells.

“Considering that nucleoli are actively transcribing DNA, slow coalescence might prevent the nucleolar transcription from being disrupted, thus helping to ensure a cell’s health,” observes Zidovska.

By contrast, she adds, human nucleoli are known to change their shape and size in many diseases, such as cancer, Alzheimer’s, and Parkinson’s, as well as in human aging. By understanding the forces that drive these changes, such as possible differences in nucleolar droplets’ viscosity, scientists could better understand the nucleolus and nucleus in both healthy and diseased cells.

The research was supported by grants from the National Institutes of Health (R00-GM104152) and the Physics of Living Systems program of the National Science Foundation (PHY-1554880).