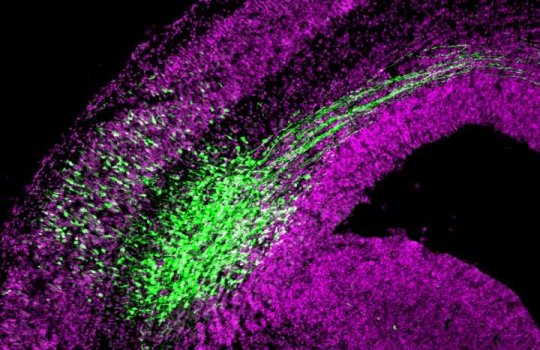 The use of stem cells to repair organs is one of the foremost goals of modern regenerative medicine. Scientists at Helmholtz Zentrum München and Ludwig Maximilian University of Munich (LMU) have discovered that the protein Akna plays a key role in this process. It controls, for example, the behavior of neural stem cells via a mechanism that may also be involved in the formation of metastases. The study was published in the journal Nature.

The research team led by Prof. Dr. Magdalena Götz, director of the Institute for Stem Cell Research (ISF) at Helmholtz Zentrum München and Chair of Physiological Genomics of the LMU Biomedical Center, wanted to identify the factors that regulate the maintenance or differentiation of neural stem cells. To this end, the scientists isolated neural stem cells, which either self-renew and generate additional neural stem cells or differentiate. “We found that the Akna protein* is present in higher concentrations in stem cells that generate neurons,” explains ISF researcher German Camargo Ortega, first author of the study together with Dr. Sven Falk. “Our experiments showed that low levels of the Akna protein cause stem cells to remain in the stem cell niche, whereas higher levels stimulate them to detach from the niche, thus promoting differentiation,” the author continues.

The scientists were surprised to discover the position of the protein ? namely at the centrosome, an organelle in the cell’s interior that acts as chief architect for the organization of the cytoskeleton and regulates cell division. “We discovered that an incorrect sequence was originally published for this protein,” Sven Falk reports. “However, our work clearly showed that Akna is located directly at the centrosome.” The researchers were able to show that Akna recruits and anchors microtubules at the centrosome. This weakens the connections to neighboring cells, and promotes detachment and migration from the stem cell niche.

“Our experiments show that this function also plays an important role in a process known as epithelial-to-mesenchymal transition, or EMT for short**,” explains the study leader Magdalena Götz. “In this process, cells detach from a cluster, proliferate and begin to migrate. This occurs, for example when stem cells migrate to form new neurons, but it can also be harmful in disease, for example when cancer cells leave a tumor to form metastases elsewhere in the body. “The novel mechanism that we identified by studying the function of Akna therefore appears to play a key role in a broad range of medically relevant processes.” In the next step, the research team plans to investigate the role of Akna in other stem cells and in the immune system.