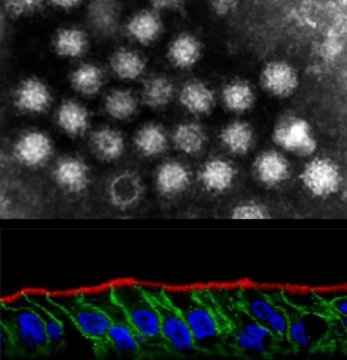 An Osaka University-led research team has developed a system for simply and efficiently producing human norovirus. By coaxing human induced pluripotent stem cells (iPSCs) to develop into a type of cell that usually lines the intestine, they created a cellular environment that can be used for producing the virus, studying how it interacts with human cells, and investigating potential vaccines.

Human norovirus is a major cause of intestinal infectious gastroenteritis, which can lead to illness and can even be fatal, particularly in children and in elderly people. No effective preventive vaccine or therapy is currently available, and studies of norovirus are severely limited because the virus cannot be easily grown in a laboratory setting. Many researchers have attempted to provide simplified methods for growing norovirus; none has succeeded, until now.

Prior to this study, published in Cellular and Molecular Gastroenterology and Hepatology, human norovirus could be grown in the laboratory but required human intestinal tissue (to provide cells for the virus to infect and grow) and bile (to provide sufficient nutrition and growth factors to those intestinal cells to allow viral growth). The main limitation of this design is that these human products are obtained through surgical methods, such as biopsy, so they are only available in limited quantities.

“Our new method uses intestinal epithelial cells (or ‘IECs’) produced from human iPSCs, which are theoretically available in nearly unlimited quantities,” says lead author Shintaro Sato. “Even more importantly, these new IECs do not require the use of bile to produce large quantities of human norovirus.”

Although bile helped viral growth, it was not necessary in order for many genotypes of norovirus to grow in these new IECs, which is a particularly important benefit of this system compared with cells that have been used in the past.

“Using these new IECs raises fewer ethical concerns than using systems that require conventional intestinal tissue,” says Sato. “As a result, we expect that this method will be useful for industrial applications, such as evaluating vaccine candidates and assessing immune responses in clinical trials.”

As a preliminary example of such an application, the researchers used the new system to identify that a lesser-known type of norovirus, GII.17, might be better than the predominant type of norovirus, GII.4, as the basis for a vaccine because it is effective against both GII.17 and GII.4 noroviruses. This finding, along with the new cellular system for producing norovirus, may help provide new and more effective vaccines against the virus, much more rapidly.