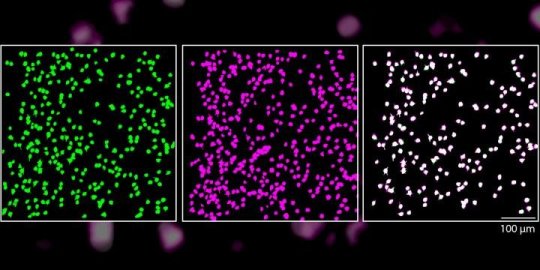 Single neurons in the brain’s primary visual cortex can reliably detect straight lines, even though the cellular makeup of the neurons is constantly changing, according to a new study by Carnegie Mellon University neuroscientists, led by Associate Professor of Biological Sciences Sandra Kuhlman. The study’s findings, published in Scientific Reports on Oct. 16, lay the groundwork for future studies into how the sensory system reacts and adapts to changes.

Most of us assume that when we see something regularly, like our house or the building where we work, our brain is responding in a reliable way with the same neurons firing. It would make sense to assume that the same would hold true when we see simple horizontal or vertical lines.

“The building our lab is in has these great stately columns,” said Kuhlman. “The logical assumption is that as we approach the building each day our brains are recognizing the columns, which are essentially straight lines, in the same way. Scientifically, we had no idea if this was true.”

While Kuhlman and other scientists believed that this idea of neuronal reliability is a likely hypothesis, they also had reason to believe it might not be the case. The protein components that constitute the cellular makeup of individual neurons continually change over the course of hours or days, which might alter when they respond to a given stimulus. Neither hypothesis had been proven experimentally.

In the case of vision, researchers did know that when we first encounter a stimulus, a group of neurons in the brain’s primary visual cortex respond to the stimulus’ orientation, determining if the stimulus is horizontal, vertical or tilted at an angle. The neurons pass this information deeper into the brain’s visual cortex to the next stage of processing. But they didn’t know which neurons were responding and if the same ones responded each time.

A new imaging technology called two-photon microscopy allowed neuroscientists in Kuhlman’s lab to visualize between 400-600 neurons at once in the primary visual cortex of a mouse model that expresses a fluorescent protein when a neuron is activated. In the experiment, the mouse was shown a sequence pattern of differentially oriented lines — some horizontal, some vertical, and others at angles. These stimuli activated excitatory neurons and caused them to emit a fluorescent signal, which could be seen using the microscope technique.

Over a two-week period, the mice were exposed to the same visual stimuli and researchers measured the response profile of each of the hundreds of neurons. They found that, throughout the study, about 80 percent of the tracked neurons were reliably activated by the same oriented lines. They also reliably remained silent to the same oriented lines. This indicated that they maintained the same functional role within the brain circuit for days.

The researchers were able to test an extensive range of stimuli, including measuring how the neurons responded to lines of varying thickness. They found that some neurons were unstable in how they responded to thickness, while maintaining their original selectivity to line orientation. Kuhlman noted that this indicated that individual neurons can continually encode particular visual features while still being able to adapt to others.

“It was interesting to see plasticity in one feature, but not another,” said Kuhlman. “This gives us a key insight into how our brains may maintain a stable perception of the world while incorporating new information. For example, you want to be able to recognize your building even if slight updates are made, such as if the columns of your building are cleaned. It appears that we can update one aspect of a stimulus feature without completely altering the functional response property of a given neuron.”

The researchers will use this dataset as a control for their next set of studies that aim to see how these neurons respond when there are changes in the visual system, such as while learning a new visual task or following recovery from ocular occlusion.

Materials provided by Carnegie Mellon University. Note: Content may be edited for style and length.