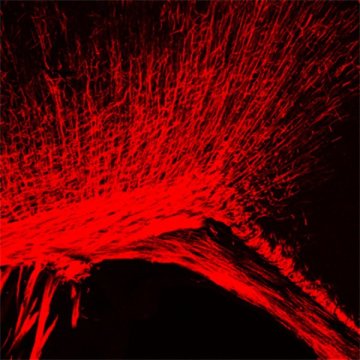 New preclinical research shows a gene already linked to a subset of people with autism spectrum disorder is critical to healthy neuronal connections in the developing brain, and its loss can harm those connections to help fuel the complex developmental condition.

Scientists at Cincinnati Children’s Hospital Medical Center report in Developmental Cell their data clarify the biological role of the gene CHD8 and its protein CHD8 in developing oligodendrocytes, cells that form a protective insulation around nerves. The sheath supports neuronal connections in the brain and manifest themselves in white matter.

Although previous studies show disruptive mutations in CHD8 cause autism spectrum disorders (ASDs) and abnormalities in the brain’s white matter, the underlying biology has been a mystery.

The current study, published online June 18, shows that disruption of CHD8 hinders the production and maintenance of nerve insulation — harming the brain’s neuronal connections and contributing to white matter damage. In laboratory mouse models genetically engineered to not express the CHD8 protein in the oligodendrocytes, the animals exhibited behavioral anomalies and seizures, according to lead study investigator Q. Richard Lu, PhD, Division of Experimental Hematology and Cancer Biology.

“So far no treatment is available for autism patients with mutations in CHD8, one of the highest risk-susceptibility genes for autism,” Lu said. “Current studies are still at a very early stage in terms of therapeutic agents, but our findings present a potential strategy to restore the function of faulty CHD8-dependent processes.”

Scientists found the strategy by using a number of experimental procedures with mice, including ChIP-Seq analysis of specific DNA-binding sites in developing oligodendrocytes, which helped them unravel biological processes. Their data showed that CHD8 loss or mutation reduces the function of what is known as a histone methyltransferase, which helps activate target genes needed for oligodendrocyte development.

They then figured out that using an experimental compound (CPI-455), which inhibits a different molecule linked to CHD8 called histone demethylase, rescued the development of oligodendrocytes. This reversed white matter defects in CHD8-mutant mice and reduced neurological problems in the animals.

Lu said the findings suggest that modulating the activity of CHD8 and the molecules that control it has the potential to enhance the generation of neuronal insulation in people with ASDs. He also stressed it will be years before knowing if the research will translate to clinical care in patients.

Additional studies are needed to verify the current study’s findings, identify a suitable drug, and test its safety and effectiveness in laboratory models.

CHD8 functions in the cell nucleus. It essentially unlocks the double-helix structure in the nucleus that contains DNA and RNA coding molecules. This allows changes to the helix’s genetic and molecular composition that support the development of oligodendrocytes and nerve insulation by regulating levels of encoded gene products.

When mutations or loss of CDH8 occur, it results in harmful remodeling of molecular components in the helix (referred to as chromatin).