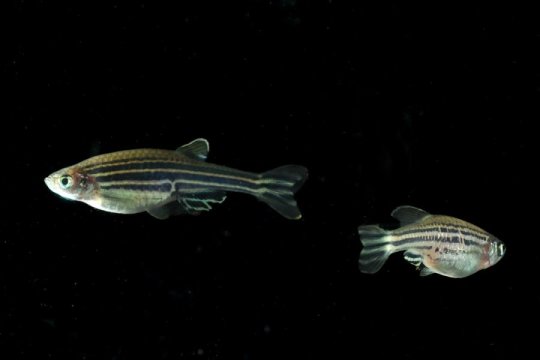 A key ingredient of energy drinks could be exacerbating some of the negative effects of binge drinking according to a new study.

Many people mix energy drinks with alcohol to counteract the sedative nature of alcohol, tricking users into feeling more awake and less drunk than they really are.

However, when researchers from the University of Portsmouth and the Federal University of Santa Maria in Brazil tested the effects of taurine, a key ingredient of many energy drinks, and alcohol on social and fear responses in zebrafish, they found that taurine seemed to increase the fear-reducing properties of alcohol, but also affected social communication.

Co-author of the study Dr Matt Parker, Senior Lecturer in Behavioural Pharmacology and Molecular Neuroscience at the University of Portsmouth, said: “The effects of mixing alcohol and energy drinks is yet to be established. This study is the first to show that the two together may be exacerbating some of the negative effects of binge drinking; that is reduction of fear and problems in social communication while intoxicated, which collectively increase the risk of fighting, violence and participation in risky behaviours.”

In the study, published in the Journal of Psychiatric Research, the researchers tested how taurine and alcohol (at volumes reflecting levels that would induce moderate human intoxication) affected the behaviour of 192 zebrafish. The fish were divided into shoals (with four fish per shoal) and were exposed to either just water, taurine and alcohol separately or taurine and alcohol for one hour. Their shoaling behaviours were then analysed at different time intervals at 0-5 minutes, 30-35 minutes and 55-60 minutes. The fish were also tested for their fear-like responses to a predator by dividing the tank into four areas, with the furthest area used to mimic a predator fish.

The fish that were exposed to both alcohol and taurine had fewer interactions with other fish in the shoal compared to those exposed to water alone or just alcohol. These fish also showed more ‘risky’ behaviour, spending more time in the predator zone than other groups.

Dr Parker said: “Binge drinking and general alcohol misuse is a key problem in the UK and across the world, with the numbers of hospital admissions resulting from illness or injury following intoxication costing the NHS millions per year. Alcohol reduces our inhibitions, and in low doses can cause relaxation and euphoria. However, in higher doses this low inhibition can cause problems with fighting or risky behaviour. Zebrafish have similar biological and behavioural responses to alcohol, and are a highly social species, making them ideal for studying the effects of alcohol on behaviour.

“Here, we found that the addition of taurine, an ingredient in many ‘energy’ drinks, appears to exacerbate risky choices in zebrafish, as well as reducing their social cohesion. Taken together, these data appear to suggest that mixing alcohol and taurine might be a factor in increasing some of the negative effects of alcohol. People should be aware that drinking energy drinks in combination with alcohol may impair their judgement, and should do so with caution.”