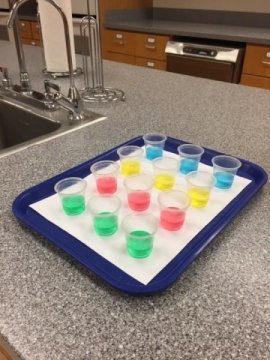 Color can impact the taste of food, and our experiences and expectations can affect how we taste food, according to Penn State researchers, who suggest this may have implications for how food and beverage industries should market their products.

Also, the researchers wanted to determine why people enjoy the bitter taste in some foods but not others.

“Bitterness can indicate toxicity, but people still enjoy coffee, chocolate and IPA-style beers,” said Molly J. Higgins, doctoral candidate in food sciences. “Why do people like some bitter compounds but not others?”

“There may be different kinds of bitterness, even if we don’t have the language to describe it,” said Hayes.

First, Hayes and Higgins needed to test whether they could teach people to associate specific tastes with specific colors. They created solutions that tasted bitter, sweet, sour or savory, and paired each one with a unique color, such as green for sweet or red for bitter.

“We avoided preconceived color-taste pairings, such as yellow for sour or red for sweet, because we didn’t want to bias our sample,” said Higgins.

The researchers had participants taste the colored liquids over four different sessions, then gave the participants uncolored solutions and asked them to taste and choose a color for each.

Participants matched the correct color and taste 59 percent of the time, significantly higher than the researchers expected from random chance, which would have been 25 percent. It surprised researchers how quickly some participants learned to associate new colors with different tastes.

“This was only after four exposures,” said Higgins. “We were surprised to see some participants correctly match every sample in the post test.”

After showing that they could teach new color-taste associations to their participants, researchers then tested whether people could distinguish between three different bitter tastes — caffeine, quinine, and Tetralone, a hop extract found in beers. Hayes and Higgins repeated the experiment with a new group of study subjects and assigned unique colors to each bitter chemical, such as yellow for caffeine and green for quinine. However, after four lab visits, participants could not match the colors to their corresponding bitter compounds any better than expected by chance.

Although the research did not get the results they expected, they still were intrigued by how quickly some participants learned new color-taste associations in the first experiment. Hayes and Higgins continue to study how people associate taste with color, noting that while some participants were quick learners, others were not.

“This finding could indicate that some people learn color-taste associations well, while others might be more resistant to changes or new color-taste associations,” said Higgins. “This might have implications in the food industry if a company were to launch a new flavored product with a color. Some consumers might not learn or accept a new color and flavor pairing as well as others.”

The U.S. Department of Agriculture Hatch Project and Penn State supported this work. Kalsec supplied materials for this research.

Materials provided by Penn State. Original written by Carolyn Triesch. Note: Content may be edited for style and length.