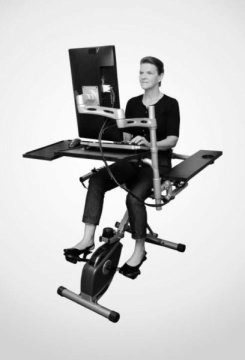 A recent pilot study by kinesiologists at the University of Massachusetts Amherst found that pedaling while conducting work tasks improved insulin responses to a test meal. Investigators led by Dr. Stuart Chipkin found that insulin levels following the meal were lower when sedentary workers used a pedal desk compared to a standard desk. In addition, work skills were not decreased in the pedaling condition.

Chipkin and colleagues conclude that pedal desks “could have the potential to achieve public and occupational health goals in sedentary work environments.” They point out that physical inactivity and sedentary work environments have been linked to higher rates of obesity, diabetes and heart disease through insulin resistance and other mechanisms. Results appear in the October issue of Medicine & Science in Sports & Exercise.

Chipkin, an endocrinologist who studies the impact of physical activity and medications on insulin sensitivity and skeletal muscle metabolism at UMass Amherst’s School of Public Health and Health Sciences, explains that instead of approaching the problem by trying to squeeze intermittent activity into a largely sedentary work routine, “we chose to consider integrating physical activity into the workday.”

He and colleagues felt that the alternatives now available for office workers — standing desks and treadmill desks — are not feasible to use for whole shifts and may even pose some barriers, such as standing too long. By contrast, a pedal desk can be used in a seated position at the user’s own pace for as little or as much time as the worker chooses.

Though there are currently no commercial pedal desks on the market, Chipkin and colleagues were able to use a prototype Pennington Pedal Desk co-invented by UMass Amherst kinesiology researcher Catrine Tudor-Locke, a co-author who did not determine study design or have any contact with participants or study data.

For this work, the researchers recruited 12 overweight/obese full-time sedentary office workers, six men and six women, and tested them in two conditions, pedaling at self-selected light-intensity pace for two hours, and working while seated for two hours at a conventional desk. In both conditions, participants performed computer-based tasks and were tested on mouse proficiency, typing speed and accuracy, reading comprehension and concentration/attention.

The participants also provided blood samples after eating a light meal for analysis of metabolic responses of glucose, insulin and free fatty acids, a link between obesity, insulin resistance and type 2 diabetes.

Chipkin and colleagues report that pedal desk use required significantly less insulin to maintain glucose concentrations compared with using the standard desk. He notes, “It took much less insulin to keep their blood sugars the same. This means that the body doesn’t work so hard to maintain blood glucose and fatty acid levels with use of the pedal desk compared to a standard desk. From the metabolic point of view, the pedal desk seems to be helpful and the from the work point of view, work tasks were not impaired.”

“While there were no changes in blood glucose or free fatty acids, none would be expected in a group of subjects without diabetes,” he notes. In future studies, Chipkin plans to explore the impact of the pedal desk on people with diabetes.

Materials provided by University of Massachusetts at Amherst. Note: Content may be edited for style and length.