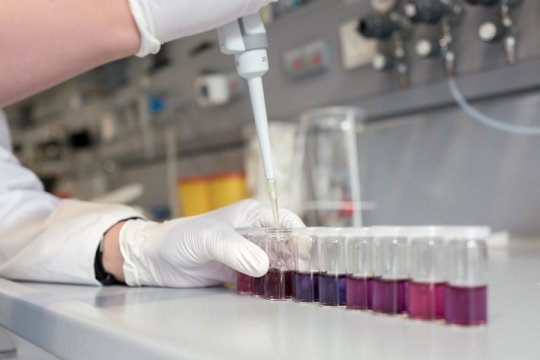 Chemists at Ruhr-Universität Bochum have developed a new method of observing the chemical reactions of individual silver nanoparticles, which only measure a thousandth of the thickness of a human hair, in real time. The particles are used in medicine, food and sports items because they have an antibacterial and anti-inflammatory effect. However, how they react and degrade in ecological and biological systems is so far barely understood. The team in the Research Group for Electrochemistry and Nanoscale Materials showed that the nanoparticles transform into poorly soluble silver chloride particles under certain conditions. The group led by Prof Dr Kristina Tschulik reports on the results in the Journal of the American Chemical Society from July 11, 2018.

Measurement in a natural environment

Even under well-defined laboratory conditions, current research has yielded different, sometimes contradictory, results on the reaction of silver nanoparticles. “In every batch of nanoparticles, the individual properties of the particles, such as size and shape, vary,” says Kristina Tschulik, a member of the Cluster of Excellence Ruhr Explores Solvation. “With previous procedures, a myriad of particles was generally investigated at the same time, meaning that the effects of these variations could not be recorded. Or the measurements took place in a high vacuum, not under natural conditions in an aqueous solution.”

The team led by Kristina Tschulik thus developed a method that enables individual silver particles to be investigated in a natural environment. “Our aim is to be able to record the reactivity of individual particles,” explains the researcher. This requires a combination of electrochemical and spectroscopic methods. With optical and hyperspectral dark-field microscopy, , the group was able to observe individual nanoparticles as visible and coloured pixels. Using the change in the colour of the pixels, or more precisely their spectral information, the researchers were able to follow what was happening in an electrochemical experiment in real time.

Degradation of the particles slowed down

In the experiment, the team replicated the oxidation of silver in the presence of chloride ions, which often takes place in ecological and biological systems. “Until now, it was generally assumed that the silver particles dissolve in the form of silver ions,” describes Kristina Tschulik. However, poorly soluble silver chloride was formed in the experiment — even if only a few chloride ions were present in the solution.

“This extends the lifespan of the nanoparticles to an extreme extent and their breakdown is slowed down in an unexpectedly drastic manner,” summarises Tschulik. “This is equally important for bodies of water and for living beings because this mechanism could cause the heavy metal silver to accumulate locally, which can be toxic for many organisms.”

The Bochum-based group now wants to further improve its technology for analysing individual nanoparticles in order to better understand the ageing mechanisms of such particles. The researchers thus want to obtain more information about the biocompatibility of the silver particles and the lifespan and ageing of catalytically active nanoparticles in the future.