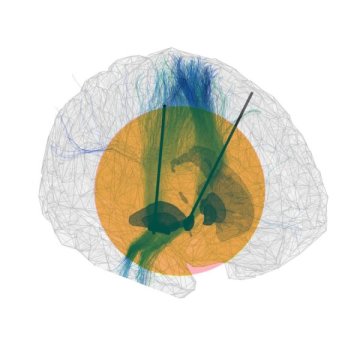 Researchers from Charité — Universitätsmedizin Berlin have studied motor and cognitive effects of deep brain stimulation in patients with Parkinson’s disease. Their results show that the adverse cognitive effects of deep brain stimulation are linked to a different neural pathway than that responsible for the treatment’s desired motor effects. This finding will help optimize treatments for patients with Parkinson’s disease. Results from this research have been published in Brain.

Deep brain stimulation (DBS) is an effective treatment alternative for Parkinson’s disease patients with an inadequate response to drug treatments. DBS targets the subthalamic nucleus, which forms part of the diencephalon, a division of the forebrain. The subthalamic nucleus integrates information from different neurons and is primarily responsible for motor processes, but also plays an important role in cognitive processes, such as decision-making and response modulation.

Researchers from Charité’s Department of Neurology on Campus Charité Mitte have studied the effect of DBS on both cognitive and motor pathways. By combining behavioral experiments with brain mapping and computational modeling, the researchers were able to show that effects on motor function — such as improvements in motor control — are mediated by different neural pathways to those responsible for unwanted cognitive effects, such as premature actions in situations involving a decision-making process.

These findings enhance our understanding of the neuronal networks affected by Parkinson’s disease, deliver insights into the pathophysiology of Parkinson’s disease, and enable us to draw conclusions regarding the mechanism of action of DBS. “Only an improved understanding of the treatment’s mechanism of action will allow us to make deep brain stimulation more effective, thus enabling us to improve the quality of life of patients with Parkinson’s disease through a reduction in the side effects of treatment,” explains the study’s first author, Dr. Wolf-Julian Neumann, a researcher at the Department of Neurology.

As a next step, the researchers from the Movement Disorders Working Group are hoping to use measurements of neural activity to differentiate between disease-specific patterns of neural activity and patterns found in healthy individuals. “This will allow us to adapt brain stimulation treatments according to the needs of the individual patient and in real time. “It is an important step on the way to developing an intelligent, personalized and demand-adapted treatment,” says Working Group Leader Prof. Dr. Andrea A. Kühn of the Department of Neurology.