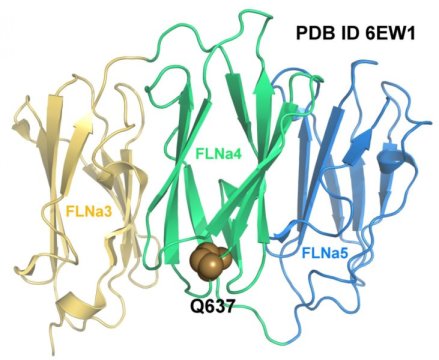 About three per cent of the world’s population is affected by valvular heart diseases. It is also the most common cause of heart surgery, as no drug-based treatment is available. Recent research has shed light on the molecular mechanism on valvular disease that is caused by a genetic mutation in Filamin gene. The result of the research will help to further investigate the mechanism by which the medical condition progress and to develop new treatments.

An international team of researchers from the universities of Jyväskylä, Turku, Nantes and Illinois has investigated how a mutation in the gene that encodes the Filamin A protein causes heart valvular disease to develop at the molecular level. The researchers succeeded to determine the three-dimensional structure of the mutated fragment by X-ray crystallography. The structure of the mutated protein was then compared to the structure of wild-type, i.e. the natural form of Filamin. The researchers found that although the mutation in question does not alter the protein structure, the mutated protein cannot withstand the same forces as wild-type Filamin A.

“By making use of the structures that have been determined for both the wild-type and the mutated protein, with the aid of techniques from computational biophysics we were able to determine how the mutation affects the protein’s ability to transmit a cellular force,” says postdoctoral researcher Tatu Haataja of the Department of Biological and Environmental Science at the University of Jyväskylä.

Defective power transmission in the cell

Previous research has shown that the intracellular force transmission is essential for the proper development of the heart valve during the fetal period when Filamin A is especially expressed. This new finding that the mutation in Filamin A effects on its ability to transmit force in the cell could, at least partially, explain the origin of valvular disease in the heart. The mutation that contributes to valvular disease was also found to negatively affect the binding of Filamin A to a tyrosine phosphatase, an enzyme that is known to be essential to heart development.

“The molecular mechanisms of heart valvular disease are very complicated,” says Haataja. “Although these results cannot fully explain the mechanism by which the mutation in Filamin A causes valvular disease, they do give a good starting point for determining that mechanism and for developing new therapeutics.”

Materials provided by University of Jyväskylä – Jyväskylän yliopisto. Note: Content may be edited for style and length.