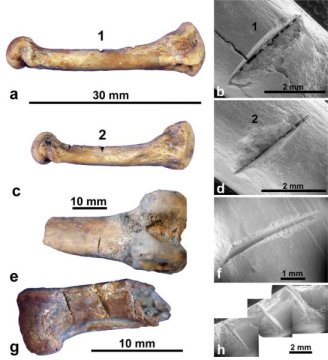 New archaeological evidence from southwest Madagascar reveals that modern humans colonized the island thousands of years later than previously thought, according to a study published October 10, 2018 in the open-access journal PLOS ONE by Atholl Anderson from the Australian National University, Canberra, Australia, and colleagues.

Madagascar’s colonization is key for tracing prehistoric human dispersal across the Indian Ocean, but exactly when human settlement began in the island remains unclear. Several pieces of evidence, including archaeological findings such as chert tools and charcoal, provide a direct indication of human occupation in Madagascar from about 1500 years before present (BP). However, recent studies have suggested that the island’s early settlers made first landfall as early as 5000 years BP, based on indirect evidence from animal bones with damage (cutmarks) presumably resulting from human activity. Anderson and colleagues revisited these bone collections and excavated three new sites in southwest Madagascar to collect a larger sample of animal bone material.

They recovered 1787 bones belonging to extinct megafauna, such as hippos, crocodiles, giant lemurs, giant tortoise and elephant birds, dated between 1900 BP and 1100 years BP. Microscopic analyses revealed that potential cutmarks in bones dated before 1200 years BP were in fact animal biting and gnawing marks, root etching, or chop marks from the excavation, suggesting that cutmarking (and human activity) only appeared after that time point. Similar results were obtained upon re-examination of bone damage previously interpreted as cutmarks in samples from old collections. The study also confirmed previous evidence of megafaunal extinction starting around 1200 years BP.

These findings add to the evidence showing that prehistoric human colonization of Madagascar began between 1350 and 1100 years BP, and suggest that hunting gradually led to the extinction of the island’s megafauna.