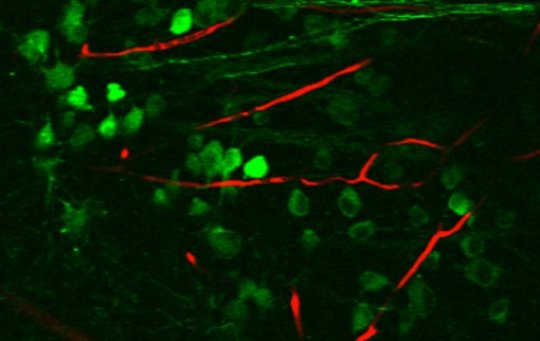 How are the images cast on the retina reassembled in the brain? Researchers in Munich and Tuebingen find that processing of visual stimuli occurs at the earliest waystation on the way to the visual cortex — but not all are treated equally.

In humans, the visual system collects up to 80% of all the sensory data received from the environment. In order to make sense of this deluge of optical information, the visual inputs that are picked up and converted into electrochemical signals by the approximately 130 million light-sensitive cells in the retina are fed into, and processed by a complex network of nerve cells in the brain. How the brain manages to accomplish this task is still not fully understood. A more detailed picture of the steps involved is, however, essential for the further development of artificial visual systems. Now a team led by Ludwig-Maximilians-Universitaet (LMU) in Munich neurobiologist Laura Busse, in cooperation with Thomas Euler and Philipp Berens (University) has succeeded in shedding new light on a longstanding and controversial issue in this field. In an article that appears in the leading journal Neuron, the researchers demonstrate that incoming signals from the retina are subjected to selective processing and weighting at the first neuronal waystation in the functional pathway that connects the retina to the visual cortex.

In the mouse, the visual image that impinges on the retina is received by more than 30 specialized and functionally distinct types of ganglion cells. These different cell types respond in different ways to the input from the photoreceptors. For example, some react selectively to dark contrasts, while others are sensitive to particular spatial patterns. The streams of information that emanate from this retinal processing step are then conveyed in several parallel channels to the brain. “Primates appear to possess a similarly diverse set of retinal ganglion cells, and this most probably holds true for humans as well,” says Busse. “Using the mouse as a model system, we have asked which types of ganglion cells project into the visual thalamus, and whether the information that arrives there is simply passed on, or is subjected to processing and transformation.” The visual thalamus is the first waystation on the way to the cerebral cortex, and this processing pathway is, among other things, responsible for the perception and analysis of form and for object recognition. Both of the questions posed by Busse and her colleagues have been the focus of controversial debates. On the one hand, functional studies appeared to argue against the processing of ganglion input in the thalamus. However, recent anatomical studies have shown that individual cells in the thalamus may receive input from more than 90 retinal ganglion cells, which strongly suggests that these thalamic cells have a selective and/or an integrative processing role.

Working closely together, the teams in Munich and have now investigated what happens to the incoming signals in the visual thalamus of the mouse. They used an array of controlled visual stimuli designed to evoke a range of responses — such as switching from dark to bright or vice versa, and alterations in contrast or changes in the period of a flickering signal — and analyzed the reactions of both retinal and thalamic cells. They found that most types of retinal ganglion cells indeed transmit information to the visual thalamus. They then used the results of their electrophysiological measurements to construct a computer model that allowed them to deduce which, and how many, of these cells contribute to the response of the thalamus. “The model indicated that the response of an individual thalamus cell depends on no more than five different types of retinal ganglion cells,” says Busse. That cell essentially combines the signals received from these five cell types, but not all are given equal weight. Instead, the information received from two types of input cell dominates the output signal emitted by any given thalamus cell. The signals contributed by the other three have little influence on the form of the output, such that the latter often shows a strong resemblance to the input provided by one of the retinal ganglion cells.

According to the authors, however, the weak signals conveyed by the non-dominant cell types may nevertheless help to make the visual system more ‘robust’ to computational errors — by for example enhancing the functional connections between the cells in the network, in cases where a single retinal ganglion projects to many different cells in the thalamus. It is also possible that the relative weightings of the signals can be varied, to allow different combinations of input to be dynamically processed during learning processes, for instance. “At all events, the thalamus is not simply a passive relay station between the retina and the brain. It also serves as a signal processing site, and plays an important role in the relative weighting of incoming signals.”

The work was supported by the Deutsche Forschungsgemeinschaft (DFG) as part of Collaborative Research Center 1233 on Robust Vision.