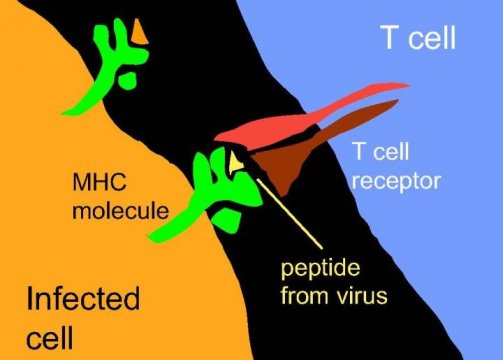 Cytomegalovirus is widespread and remains in the body for a lifetime after infection. In healthy individuals, this virus is usually kept in check but can become dangerous when the immune system is weakened or during pregnancy. DZIF scientists at the Helmholtz Zentrum München have developed an analytic method that can very precisely detect viral infections using immune responses. This method could help identify gaps in protection early on, and make transplants safer in future.

The human cytomegalovirus (CMV) is globally widespread and the majority of adults are carriers, also in Germany. After an infection, the virus hides in the body for a lifetime, which usually goes unnoticed. However, when the immune system is weakened, as is the case after transplants or when unborn children become infected during pregnancy, it can cause damage to a range of different organs including the nervous system. It is therefore important to find out whether an appropriate immune response against the virus is present in order to prevent such damage from occurring.

Dr Andreas Moosmann heads a DZIF research group at the Helmholtz Zentrum München and is specialised in studying immune responses to viruses. “In healthy humans, cytomegalovirus replication is curbed by T cells in particular,” explains Moosmann. Billions of different T cells patrol through our body. Each cell has its own sensor on its surface, a so-called T cell receptor, which is able to identify just a small portion of a specific pathogen. As soon as this sensor is activated, the T cell turns into a killer cell. The infected cell is then killed and the viruses contained within it cannot replicate any longer. “Just by looking at specific T cells in the blood, we can now precisely detect whether a virus is present,” says Moosmann. The problem up to now has been that complex techniques challenged such analyses. “Separate tests were required for every individual type of T cell and for each particular specificity,” says Moosmann.

One test for many types of viruses

In order to identify viruses more rapidly and precisely, Moosmann and his Munich team of scientists developed a method that enables analysis of millions of T cells with one single test. “We sequence ribonucleic acid (RNA) from the blood samples, through which we can identify existing types of T cell receptors that are specific for different parts of CMV,” explains PhD candidate Alina Huth. Using this new method, the scientists were able to identify 1052 CMV-specific T cell receptors in eight healthy virus carriers. In a second group of 352 donors, the scientists measured the prevalence of these sequences, enabling them to very precisely predict infected donors.

The results will be serve to establish a database of virus-specific T cell receptors. According to the scientists, this method can also be used for other viruses. Biologist Dr Xiaoling Liang is convinced that “This diagnostic method will deliver more information at a lower cost and is therefore attractive for clinicians in future. We can now develop a test that can directly determine the immune status for different viruses in one step.”

The applications of such a test are manifold. For example, it could be used to predict viral infections in transplant patients and other people with weakened immune systems and enable timely treatment. “We believe this test has great potential. It could, for example, also be used to check if a vaccination has been successful. And it will promote research on the connections between infections, auto-immune diseases and allergies,” adds Moosmann.

Materials provided by German Center for Infection Research. Note: Content may be edited for style and length.