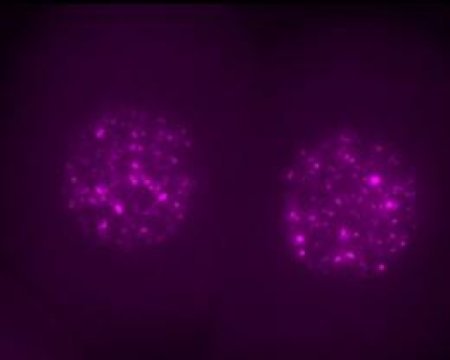 A so-called “jumping gene” that researchers long considered either genetic junk or a pernicious parasite is actually a critical regulator of the first stages of embryonic development, according to a new study in mice led by UC San Francisco scientists and published June 21, 2018 in Cell.

Only about 1 percent of the human genome encodes proteins, and researchers have long debated what the other 99 percent is good for. Many of these non-protein coding regions are known to contain important regulatory elements that orchestrate gene activity, but others are thought to be evolutionary garbage that is just too much trouble for the genome to clean up.

For example, fully half of our DNA is made up of “transposable elements,” or “transposons,” virus-like genetic material that has the special ability of duplicating and reinserting itself in different locations in the genome, which has led researchers to dub them genetic parasites. Over the course of evolution, some transposons have left hundreds or thousands of copies of themselves scattered across the genome. While most of these stowaways are thought to be inert and inactive, others create havoc by altering or disrupting cells’ normal genetic programming and have been associated with diseases such as certain forms of cancer.

Now UCSF scientists have revealed that, far from being a freeloader or parasite, the most common transposon, called LINE1, which accounts for 20 percent or more of the human genome, is actually necessary for embryos to develop past the two-cell stage.

Study senior author Miguel Ramalho-Santos, PhD, an associate professor of obstetrics/gynecology and reproductive sciences and a member of the Eli and Edythe Broad Center for Regeneration Medicine and Stem Cell Research at UCSF, has been interested in transposons since he first set up his lab as an independent UCSF Fellow in 2003.

He and others had observed that embryonic stem cells and early embryos expressed high levels of LINE1, which seemed paradoxical for a gene that was considered to be a dangerous, disease-causing parasite. “Given the standard view of transposons, these early embryos were really playing with fire,” he remembers thinking. “It just didn’t make any sense, and I wondered if something else was going on.”

The project took off when Michelle Percharde, PhD, joined the lab as a post-doctoral researcher in 2013 and was quickly caught up in Ramalho-Santos’s enthusiasm for the LINE1 paradox. “When I saw all the LINE1 RNA that’s present in the nucleus of developing cells, I agreed there must be some role it’s playing,” Percharde said. “Why let your cells make so much of this RNA if it’s either dangerous or doing nothing?”

To determine whether the high levels of LINE1 RNA expression in mouse embryos was actually important to the animals’ development, Percharde performed experiments to eliminate LINE1 RNA from mouse embryonic stem cells. To her surprise, she found that the pattern of gene expression in these cells changed, reverting to a pattern seen in two-cell embryos after the fertilized egg’s first division. The team tried eliminating LINE1 from fertilized eggs and found that the embryos completely lost their ability to progress past the two-cell phase.

“When we saw that cells were changing identity when we removed LINE1 RNA, that was our real ‘Aha!’ moment that told us we were on to something,” Percharde said.

Further experiments revealed that although the LINE1 gene is expressed in the early embryo and stem cells, its role is not to insert itself elsewhere in the genome. Instead, its RNA is trapped within the cell nucleus, where it forms a complex with gene regulatory proteins Nucleolin and Kap1. This complex is necessary to turn off the dominant genetic program that orchestrates embryos’ two-cell state — controlled by a gene called Dux — and to turn on genes that are needed for the embryo to move on with further cell divisions and development.

The research took five years to come to fruition, and required Percharde to invent several new techniques for studying transposons along the way, but has resulted in a finding that the researchers hope will convince other scientists to finally pay attention to functional roles of jumping genes.

“These genes have been with us for billions of years and have been the majority of our genomes for hundreds of millions of years,” Ramalho-Santos said. “I think it’s fair to ask if the 1.5 percent of protein-coding genes are the free-riders, and not the other way around.”

Ramalho-Santos speculates that transposons like LINE1 may make the delicate early stages of development more robust precisely because they are so ubiquitous. Because LINE1 is repeated thousands of times in the genome, it’s virtually impossible for a mutation to disrupt its function: if one copy is bad, there are thousands more to take its place.

“We now think these early embryos are playing with fire but in a very calculated way,” Ramalho-Santos said. “This could be a very robust mechanism for regulating development.”

“Scientists have done so much work on protein-coding genes, and they’re less than 2 percent of the genome, whereas transposons make up nearly 50 percent,” Percharde added. “I’m personally excited to continue exploring novel functions of these elements in development and disease.”