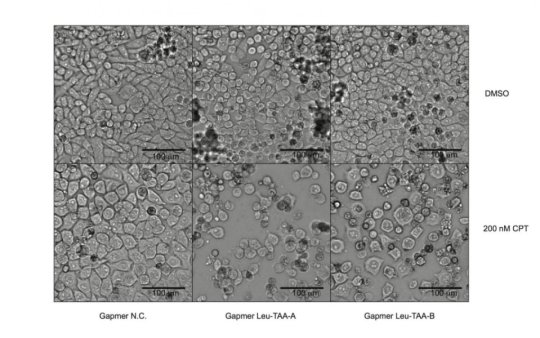 DNA-damaging agents, or “DDAs,” make up the most widely used group of cancer drugs. Yet their therapeutic success has been curtailed by drug resistance — either present in cancer cells from the disease onset or arising during treatment.

Now, biologists at the University of California San Diego have discovered a new way of re-sensitizing drug-resistant human tumor cells to the potency of DDAs.

UC San Diego Project Scientist Manqing Li, Professor Michael David and their colleagues describe on October 29 in Nature Structural and Molecular Biology how a human gene known as Schlafen 11 controls the sensitivity of tumor cells to DDAs. As such, their research may pave the way to new strategies to overcome chemotherapeutic drug resistance.

In 1998, David Schwarz, working in UC San Diego Biological Sciences Professor Stephen Hedrick’s lab, discovered the first Schlafen gene in mice. He named it for the German word for sleep because the gene’s protein product can cause cells to stop dividing. In 2012 David and Li examined Schlafen 11, a human genetic counterpart of the original discovery, and uncovered its role in HIV replication. They found that the human Schlafen 11 gene encodes a protein that hinders the replication of HIV in infected human cells by blocking the synthesis of viral proteins without suppressing the host cell’s overall ability to synthesize proteins.

In the new follow-on study focusing on tumors, the researchers discovered a similar selective effect of Schlafen 11 on two “master controllers” of the DNA damage response: ATM and ATR, protein serine/threonine kinases known for their central roles in DNA damage repair.

“We found that if you expose cells that have Schlafen 11to DNA damaging agents, the Schlafen 11 protein gets activated and suppresses the synthesis of ATM and ATR — that’s essentially what kills the tumor cells,” said David, a professor in the Biological Sciences Section of Molecular Biology and UC San Diego Moores Cancer Center. “In cells that do not express Schlafen 11, you do not get this downregulation of ATM/ATR and that essentially allows the tumor cells to survive.”

Probing deeper into the mechanisms of how Schlafen 11 works on a molecular level, the researchers found that the activated Schlafen 11 protein cleaves a specific subset of transfer RNAs, which feature an extra stem loop in their structures. These tRNAs are not of the classic “three-leaf clover”-type design, but instead have distinctive “four-leaf clover” designs, distinguishing marks that likely serve as target points for Schlafen 11. Among those affected are all transfer RNAs for the amino acids leucine and serine. One of these in particular, “tRNA-Leu-TAA,” is of extremely low abundance in the cell, but nevertheless the corresponding codon is used with high frequency in the ATM and ATR genes. When this tRNA is destroyed by cleavage, ATM and ATR are among the most susceptible targets of protein synthesis inhibition by Schlafen 11.

Further investigation revealed that most of the genes involved in DNA damage repair display a similar skewing of their transfer RNA use towards tRNA-Leu-TAA as HIV does. The researchers then developed a new technique to re-sensitize Schlafen 11-deficient tumor cells to drugs by directly targeting tRNA-Leu-TAA. This intervention can influence the entire DNA damage repair pathway — including ATM and ATR — rather than inhibiting the function of one specific component at a time. Such a strategy, they say, could have significant potential in clinical cancer treatment and addressing the challenges of drug resistance.

“These results suggest two ways to enhance the killing of cancer cells by DNA-damaging drugs by adding 1) ATR inhibitors or 2) tRNA inhibitors,” said Wang. “The paper is also of significance to the basic research on DNA damage response because it shows for the first time that regulation of tRNAs determines when a damaged cell will survive or die.”

In addition to relevance to DNA damage and cancer, David notes that the new results carry potential applications in immunology and virology since the fundamental mechanisms behind Schlafen 11 are also at play in anti-HIV processes and likely with other viruses.

David acknowledges the significant contributions of co-first authors Elaine Kao and Dane Malone, as well as to Xia Gao, of UC San Diego’s Division of Biological Sciences, and Wang, professor emeritus of the Department of Medicine and UC San Diego Moores Cancer Center.