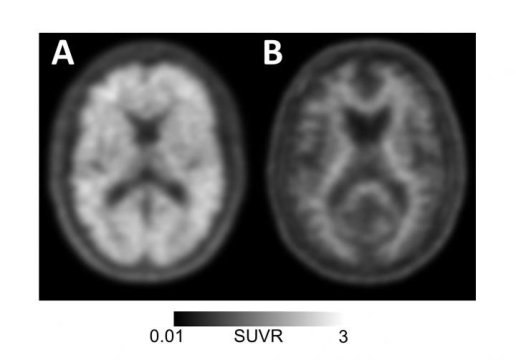 A first-of-its-kind national study has found that a form of brain imaging that detects Alzheimer’s-related “plaques” significantly influenced clinical management of patients with mild cognitive impairment and dementia.

The study revealed that providing clinicians with the results of positron emission tomography (PET) scans that identify amyloid plaques in the brain changed medical management — including the use of medications and counseling — in nearly two-thirds of cases, more than double what researchers predicted in advance of the study. The technique, known as “amyloid PET imaging,” also altered the diagnosis of the cause of cognitive impairment in more than one in three study participants.

“We are impressed by the magnitude of these results, which make it clear that amyloid PET imaging can have a major impact on how we diagnose and care for patients with Alzheimer’s disease and other forms of cognitive decline,” said study lead author and principal investigator Gil Rabinovici, MD, Distinguished Professor of Neurology at the UCSF Memory and Aging Center and member of the UCSF Weill Institute for Neurosciences.

“These results present highly credible, large-scale evidence that amyloid PET imaging can be a powerful tool to improve the accuracy of Alzheimer’s diagnosis and lead to better medical management, especially in difficult-to-diagnose cases,” added Maria C. Carrillo, PhD, Alzheimer’s Association chief science officer and a co-author of the study. “It is important that amyloid PET imaging be more broadly accessible to those who need it.”

Alzheimer’s disease is characterized by the accumulation of both amyloid protein plaques and tau protein “tangles” in the brain, the presence of which are required for a definitive diagnosis. Until recently, amyloid plaques could only be detected by postmortem analysis of autopsied brain tissue. With the advent of amyloid PET — which involves injecting patients with “tracer” molecules that stick to amyloid plaques and can be used to visualize their location in the brain — it became possible to detect plaques with a brain scan and therefore more accurately diagnose people living with the disease.

Though there is no cure for Alzheimer’s disease, early diagnoses enable physicians to prescribe appropriate symptom-management therapies, counsel families on important safety and care-planning issues and direct people to clinical trials for promising new drugs. It also allows people with the disease and their families to plan for the future, including legal and financial issues, and accessing resources and support programs. PET imaging results that reveal no signs of amyloid buildup in the brain rule out Alzheimer’s disease as the cause of memory loss, which can prompt an evaluation for alternative and sometimes reversible causes, such as medication side effects, sleep or mood disorders and other medical conditions.

However, despite FDA approval of amyloid PET tracers, use of amyloid PET imaging to assist with the accurate diagnosis of the cause of someone’s dementia is currently not covered by Medicare or health insurance plans, making it unavailable to most people.

Launched in 2016, the four-year Imaging Dementia — Evidence for Amyloid Scanning (IDEAS) study was developed by a team of scientists convened by the Alzheimer’s Association to determine whether learning the results amyloid PET imaging would change medical management and health outcomes of people with memory loss and cognitive decline. IDEAS recruited nearly 1,000 dementia specialists at 595 sites in the U.S. and enrolled more than 16,000 Medicare beneficiaries with mild cognitive impairment or dementia of uncertain cause. Under their Coverage with Evidence Development policy, the Centers for Medicare & Medicaid Services (CMS) reimbursed amyloid PET scans conducted at 343 facilities and interpreted by more than 700 imaging specialists as part of this clinical study.

“This was a uniquely real-world study that looked at the impact of amyloid PET imaging in community clinics and other non-academic settings, and demonstrates for the first time how much impact this technology has in real-world dementia care,” Rabinovici said.

The newly published results from the first phase of the IDEAS study focused on how amyloid PET scans altered physician diagnosis and treatment plans for the 11,409 participants who completed the study. As the study’s primary endpoint, the scientists collected data on how physicians altered participants’ medication prescriptions and counseling about safety and future planning. As a secondary endpoint, the researchers evaluated whether PET imaging results caused physicians to alter participants’ diagnoses. Finally, several exploratory endpoints included physician decisions about referrals to Alzheimer’s clinical trials.

The newly published data reveal that physicians changed their clinical management of more than 60 percent of patients in the study, more than double the number the authors had predicted in advance.

In participants who joined the study with mild cognitive impairment and whose brain scans revealed the presence of significant amyloid deposits, clinicians were twice as likely to prescribe Alzheimer’s drugs following PET imaging (~40 percent prior to imaging vs. ~82 percent following imaging). In those with dementia and significant amyloid buildup on PET scans, prescriptions of these drugs rose from ~63 percent to ~91 percent after the study. Doctors discontinued the use of these drugs in some patients whose scans revealed little amyloid deposition. In addition, for approximately one quarter of study participants, physicians changed non-Alzheimer’s drug prescriptions and counseling recommendations based on PET imaging results.

The researchers also discovered that one-third of participants who had previously been referred to Alzheimer’s clinical trials showed no sign of amyloid buildup based on PET imaging, which generally rules out Alzheimer’s disease as the cause of their cognitive symptoms. Based on the imaging results, physicians were able to ensure that nearly all patients referred to Alzheimer’s trials were amyloid-positive (93 percent), which is critical to these trials’ success.

“Accurate diagnoses are critical to ensure patients are receiving the most appropriate treatments. In particular, Alzheimer’s medications can worsen cognitive decline in people with other brain diseases,” said Rabinovici. “But perhaps more fundamentally, people who come into the clinic with concerns about memory problems want answers. An early, definitive diagnosis may allow individuals to be part of planning for the next phase of their lives and to make decisions that otherwise would eventually need to be made by others.”

The IDEAS team is currently analyzing data on the study’s second phase, which will examine how amyloid PET scans affect health outcomes following the scan. The researchers are using CMS claims data to document hospitalization rates and Emergency Department visits for IDEAS participants, and comparing them to participants with similar neurologic problems but who did not undergo amyloid PET. They plan to publish their findings in 2020. In addition, the researchers are developing a second study (known as New IDEAS) to include more people with both typical and atypical clinical presentations of Alzheimer’s and recruit a study group that better reflects the racial and socioeconomic diversity of the national population.

IDEAS Study Leadership: Rabinovici and Carrillo are co-chairs of the IDEAS Study along with Constantine Gatsonis, PhD, of Brown University School of Public Health; Bruce Hillner, MD, of Virginia Commonwealth University; Barry Siegel, MD, of Washington University School of Medicine in St. Louis; and Rachel Whitmer, PhD, of UC Davis School of Medicine and the Kaiser Permanente Division of Research, in Oakland, Calif. See the study online for a full list of authors and affiliations.

Funding: The trial was funded by the Alzheimer’s Association; the American College of Radiology; Avid Radiopharmaceuticals, Inc. (a wholly owned subsidiary of Eli Lilly and Company); General Electric Healthcare; and Life Molecular Imaging (formerly Piramal Imaging). PET scans in the study were reimbursed by the Centers for Medicare and Medicaid Services (CMS).

The IDEAS Study was developed in response to CMS’s 2013 National Coverage Decision on amyloid PET imaging in dementia and neurodegenerative disease (CAG-00431N) to not cover these scans for Medicare enrollees. CMS reimbursed amyloid PET scans for participants in the IDEAS study under its “coverage with evidence development” program. The purpose of the coverage with evidence development program is to gather additional evidence to inform a future coverage decision.

Disclosures: Rabinovici has served on scientific advisory boards for Genentech, Eisai, Merck and Roche. He receives research support from Avid Radiopharmaceuticals and Eli Lilly and Company; and serves as associate editor for JAMA Neurology. Siegel is an advisory board member for GE Healthcare and Blue Earth Diagnostics. He has received consultation fees from Avid Radiopharmaceuticals, BTG Management Services, Capella Imaging, Curium Pharma, and Merrimack Pharmaceuticals; and has received clinical trial support from Blue Earth Diagnostics and Progenics Pharmaceuticals. Siegel’s spouse is a speaker for Siemens Healthineers. All other authors report no relevant disclosures.