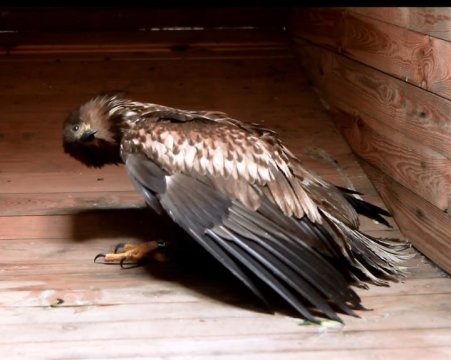 The most common unnatural causes of death in white-tailed sea eagles are lead poisoning and collisions with trains. During the winter of 2016/2017, however, many white-tailed eagles died in Northern Germany in circumstances unrelated to either cause. Instead, at least 17 white-tailed sea eagles were killed by avian influenza of the highly pathogenic virus subtype H5N8, as a team of scientists from the Leibniz Institute for Zoo and Wildlife Research (Leibniz-IZW) and the Friedrich-Loeffler-Institute (Federal Research Institute for Animal Health, FLI) demonstrated. Avian influenza may become a new threat for this highly protected wild species. The study was published in the scientific journal Viruses.

The avian flu has been a threat to wild birds and poultry for decades. Especially chicken, ducks and geese as well as several species of waterfowl have been shown to be infected with different types of the influenza virus. This lead to epidemic outbreaks, for example in Mexico in 1992, in central Europe in 2006, in the USA in 2015 and in Europe again in 2016/2017. Amongst raptors, peregrine falcons and common buzzards had been previously found to be infected but until now there was no such evidence regarding the largest bird in Europe, the white-tailed sea eagle (Haliaeetus albicilla). The investigation of 17 white-tailed sea eagles collected in the federal states of Mecklenburg-Western Pomerania, Hamburg, Schleswig-Holstein and Lower Saxonia during the winter of 2016/17 (14 of them being already dead and another 3 showing symptoms such as being overexcited and finding it difficult to move in a coordinated fashion) now demonstrated that white-tailed sea eagles can be killed by the avian influenza virus. The analysis of the entire genome of the virus isolated from the collected birds revealed that it was not the widespread influenza subtype H5N1 but the subtype H5N8 which was responsible. More precisely, the analysis revealed that it the virus belonged to the clade 2.3.4.4b, considered to be highly aggressive for birds. It causes a lethal inflammation of the brain (polioencephalitis). Lead poisoning could be ruled out as a possible cause of death for the birds, as the analysis of liver and kidney tissue demonstrated.

The northern German flat plains and the Baltic Sea coast are the main habitat for white-tailed sea eagles in Germany. Their worldwide distribution ranges from Greenland in the west to Japan in the east. Currently, there are about 750 breeding pairs in Germany. The species had been brought close to extinction during the second half of the 20th century because of excessive hunting and persecution, and the detrimental effects of the insecticide dichlordiphenyltrichlorethan (DDT). Since the 1980s populations are recovering because DDT was prohibited and persecution declined, but threats such as lead-containing ammunition continue to hamper conservation efforts until today. Furthermore, there is the potential threat of infectious diseases. “White-tailed sea eagles feed on carrion, especially during autumn and winter, and fancy waterfowl as part of their diet if available,” says Oliver Krone (Leibniz-IZW). “Diseased or handicapped waterfowl are an attractive prey for the eagles. This potentially exposes these birds to a variety of pathogens, including avian influenza viruses.”

For the scientists several questions remain unanswered and will therefore be the subject of further research. For example, it is still unclear why white-tailed sea eagles apparently showed no infections during the H5N1 epidemic of 2006, yet were highly affected during the winter of 2016/2017. “There might be species-specific differences regarding the susceptibility and vulnerability to highly pathogenic avian influenza infection,” Franz Conraths and Martin Beer (FLI) comment. “There is also the possibility that differences in the virulence of virus clades are important. The 2.3.4.4b clade seems to be highly aggressive for many species of birds, much more so than previous clades, which may a reason why even the large eagles are now affected.”

In addition, it is unclear whether H5N8 2.3.4.4b infections are invariably lethal or whether eagles can overcome the disease and acquire immunity. “The fact that the majority of the 17 eagles were young animals could suggest one of two things: Either young birds were particularly affected because they are generally a vulnerable age class, as is the case with many other infections. Alternatively, there is the possibility that this is evidence for an immunisation process,” Krone adds. “If juvenile birds are usually the age class that are infected for the first time and they survive the exposure, then older animals might become ‘immunologically experienced’ and make them more resilient also towards new varieties of pathogens.”

For people, influenza type H5N8 seems to be less threatening than H5N1. The latter was responsible for the infection of several hundred people after epidemics amongst birds, because of human to human transmission. “Until now, not a single case of animal-human transmission has been recorded for H5N8,” the FLI scientists say.