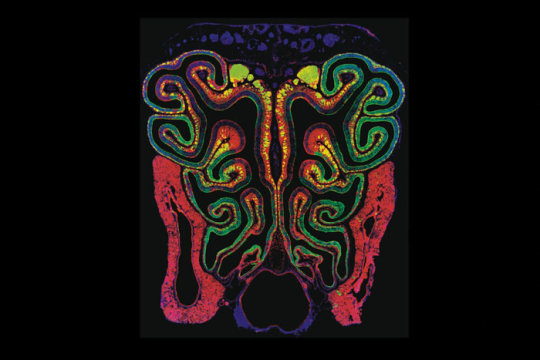 Dogs, known for their extraordinarily keen senses of smell, can be trained to use their sensitive sniffers to find drugs, bombs, bed bugs, missing hikers and even cancer. Among dogs and other animals that rely on smell, at least one factor that may give them an advantage is a sheet of tissue in the nasal cavity.

In humans, this tissue — called the olfactory epithelium — is a single flat sheet lining the roof of the nasal cavity. In dogs, however, the olfactory epithelium forms a complex maze, folding and curling over a number of bony protrusions, called turbinates, that form in the nasal cavity. The olfactory epithelium contains specialized neurons that bind to odor molecules and send signals to the brain that are interpreted as smell. Dogs have hundreds of millions more of these neurons than people do. It is assumed this added structural complexity is responsible for dogs’ superior ability to smell. But, surprisingly, that has never been shown scientifically.

“We think the surface area of the sheet matters in how well animals smell and in the types of smells they can detect,” said David M. Ornitz, MD, PhD, the Alumni Endowed Professor of Developmental Biology. “One reason we think this stems from differences in the complexity of these turbinates. Animals that we think of as having a great sense of smell have really complex turbinate systems.”

The study, published Aug. 9 in the journal Developmental Cell, also could help answer a longstanding evolutionary question: How did animals’ senses of smell become so enormously variable? The way these abilities came to diverge over evolutionary history remains a mystery. Understanding these signals could help scientists tease out how dogs evolved an extraordinary olfactory system and humans wound up with a comparatively stunted one.

First author Lu M. Yang, a graduate student in Ornitz’s lab, found that a newly discovered stem cell the researchers dubbed FEP cells control the size of the surface area of the olfactory epithelium. These stem cells also send a specific signaling molecule to the underlying turbinates, telling them to grow. The evidence suggests that this signaling crosstalk between the epithelium and the turbinates regulates the scale of the olfactory system that ends up developing, sometimes resulting in olfactory epithelia with larger surface areas, such as in dogs.

When the stem cells can’t signal properly, turbinate growth and olfactory epithelium surface area experience an arrested development. To study this in the lab, mice with such olfactory stunting could, in theory, be compared with typical mice to learn more about how these signals govern the final complexity of an animal’s olfactory system.

“Before our study, we didn’t know how the epithelium expands from a tiny patch of cells to a large sheet that develops in conjunction with complex turbinates,” Yang said. “We can use this to help understand why dogs, for example, have such a good sense of smell. They have extremely complex turbinate structures, and now we know some of the details about how those structures develop.”

Materials provided by Washington University School of Medicine. Original written by Julia Evangelou Strait. Note: Content may be edited for style and length.