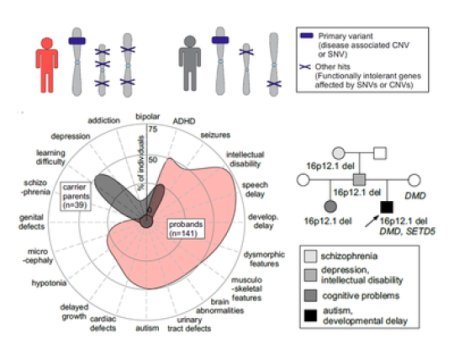 Whether an individual develops a neurodevelopmental disorder like autism or ADHD and the severity of that disorder depends on genetic changes beyond a single supposedly disease-causing mutation. A new study led by researchers at Penn State reveals that the total amount of rare mutations — deletions, duplications, or other changes to the DNA sequence — in a person’s genome can explain why individuals with a disease-associated mutation can have vastly different symptoms. A paper describing the study appeared today in the journal Genetics in Medicine.

“Genetic sequencing tools can reveal a large number of mutations in a person’s genome, but diagnosis typically focuses on identifying one primary mutation as the cause of a disorder,” said Santhosh Girirajan, associate professor of biochemistry and molecular biology and of anthropology at Penn State and senior author of the paper. “However, this strategy does not explain why many individuals with the same primary mutation have very different features or symptoms. For example, when a parent and child have the same primary mutation but only the child develops the disorder. Our work reveals that the primary mutation likely sensitizes a person to a disorder, but the amount of other mutations elsewhere in the genome is what actually determines the cognitive ability and developmental features in that person.”

The research team considered genetic, cognitive, and developmental information from individuals who contained one of two known disease-associated mutations, and of their families. Both mutations are deletions of genetic material on chromosome 16 — one in a region referred to as 16p11.2 and the other 16p12.1 — and are detected in a global screen for children with developmental delays. These primary mutations provide a frame of reference to study the additional mutations that make up an individual’s “genetic background.”

“Ninety-five percent of children who have the 16p12.1 mutation inherit it from their parents, so any difference in clinical features between the parent and child is due to what they have in the genetic background,” said Girirajan.

The researchers suggest that the primary mutation sensitizes an individual to a particular disorder and that the genetic background sets the trajectory for potential clinical features.

This study focused solely on genetic changes that occurred in the protein-coding portions of the genome. The researchers plan to expand their investigation to the rest of the genome.

Ultimately, the researchers hope this knowledge — and continued studies of how mutations affect specific, measurable traits such as IQ and head size — will change how clinicians obtain genetic data and offer diagnoses to their patients.

“We need more-thorough screens when a patient comes into a clinic so that we can consider more than just one mutation,” said Girirajan. “With knowledge about the family history and genetic background, we can get closer to a more accurate prognosis and provide rehabilitation sooner. For example, a patient could start speech therapy or physical rehabilitation before the developmental delay hits.”