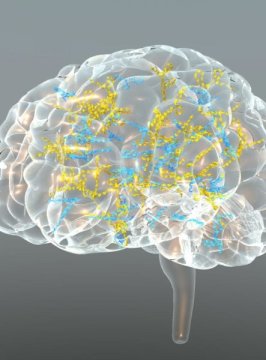 Dopamine neurons are located in the midbrain, but their tendril-like axons can branch far into the higher cortical areas, influencing how we move and how we feel. New genetic evidence has revealed that these specialized cells may also have far-reaching effects, implicating them in conditions that range from Parkinson’s disease to schizophrenia. Using a new technique known as laser-capture RNA seq, that involves cutting out dopamine neurons from a human brain section with a laser, investigators from Brigham and Women’s Hospital and Harvard Medical School have cataloged more than 70,000 novel elements active in these brain cells. Their results are published this week in Nature Neuroscience.

“We found that a whopping 64 percent of the human genome — the vast majority of which is ‘dark matter’ DNA that does not code proteins — is expressed in dopamine neurons in the human brain,” said Clemens Scherzer, MD, a neurologist and genomicist who directs the APDA Center for Advanced Parkinson’s Disease Research and leads the Precision Neurology Program at BWH. “These are critical and specialized cells in the human brain, which are working sluggishly in Parkinson’s disease, but might be overactive in schizophrenia.”

Scherzer’s team developed laser-capture RNAseq to precisely dissect out dopamine neurons from the brain and perform ultradeep RNA sequencing on human brain cells. From 86 post-mortem brains, the team was able to extract more than 40,000 dopamine neurons. While other groups have focused on protein-producing messenger RNA, Scherzer and colleagues wanted to catalog the cells’ entire RNA content, which required taking a much deeper dive.

In total, they found 71,022 transcribed noncoding elements (so called TNEs). Many of these TNEs (pronounced “teenies”) are active enhancers — sites that act as regulatory “switches” for turning on specialized functions for billions of neurons in the brain. Many of the TNEs the team unearthed are novel and had never before been described in the brain. Working with collaborators in England, Scherzer and colleagues tested several of the TNEs in preclinical models, including zebrafish, finding evidence that many were active in brain development.

Scherzer and first-author Xianjun Dong, PhD, who are also Principal Investigators at the Ann Romney Center at BWH, originally set out to study dopamine neurons to gain insights into Parkinson’s but found that many of the genetic variants associated with schizophrenia, addiction and other neuropsychiatric diseases were also enriched in these elements.

“This work suggests that noncoding RNAs active in dopamine neurons are a surprising link between genetic risk, Parkinson’s and psychiatric disease,” said Scherzer. “Based on this connection we hypothesize that the risk variants might fiddle with the gene switches of dopamine-producing brain cells.”

The team has also made an encyclopedia of RNA content for dopamine neurons publicly available so that other investigators can look up any protein-coding or noncoding target for biomarkers and therapeutics for Parkinson’s and psychiatric diseases through the webportal http://www.humanbraincode.org.