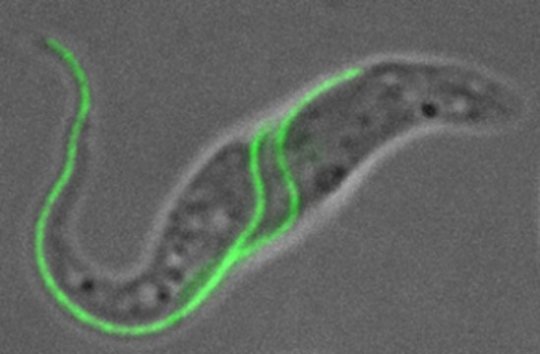 The unicellular parasite that causes sleeping sickness differs from other eukaryotes in the mode of regulation of an essential cellular signaling pathway. This provides a promising point of attack for drug development.

Trypanosoma brucei — the insect-borne eukaryotic parasite that causes sleeping sickness in tropical Africa — is the best known representative of a group of unicellular organisms known as kinetoplastids. Species belonging to this group are responsible for a number of potentially lethal infections in humans and other mammals, which are difficult to treat effectively. These include the trypanosome T. cruzi — the causative agent of Chagas disease, which is endemic to much of South America, while members of the related genus Leishmania attack the skin and mucous membranes. Leishmaniasis is a largely tropical disease, but is also found in Southern Europe. Research carried out by Ludwig-Maximilians-Universitaet (LMU) in Munich geneticist Professor Michael Boshart´s team with lead author Dr. Sabine Bachmaier and collaborators has now revealed that, in T. brucei, an essential intracellular signaling pathway is regulated differently from what has been established as a paradigm in eukaryotes. This discovery reveals a potential vulnerability, which could provide a promising target for new and specific therapies for infections caused by kinetoplastid parasites. The findings appear in the online journal Nature Communications.

Protein kinase A (PKA) is an enzyme found in virtually all nucleated (eukaryotic) organisms apart from plants, and it plays a crucial role in cellular responses to external signals. In almost all eukaryotes, the enzymatic activity of PKA is dependent on binding of the molecule cAMP, which binds to the regulatory subunit of the protein. PKA is also essential for the survival of Kinetoplastida, as it has been shown to target cell division, cell motility and development in the group. However, all efforts to demonstrate a link between cAMP and PKA activity have failed. “We have known for several years that the PKA found in T. brucei cannot be activated by cAMP, but there have been several contradictory reports in the published literature,” Boshart explains. “We have now comprehensively and conclusively verified this unexpected finding experimentally.”

To do so, the researchers developed an experimental test that allowed them to detect PKA activity in living trypanosomal cells. As in their earlier test-tube experiments, they found that there was no change in PKA activity when the intracellular level of cAMP was altered by chemical or genetic means. “In collaboration with a chemist who works for a small company, we tested an array of chemical compounds which we had identified as possible alternative regulators of the kinase enzyme, based on our experimental data,” Boshart says. The search identified a number of candidate molecules that were able to activate the typanosomal PKA. “We then chose the most effective candidate from this set and optimized its performance by appropriately modifying its chemical structure,” says Boshart. In this way, we obtained a compound that acted as a specific and highly potent activator of the enzyme.”

With the aid of 3-D structural analyses, they went on to show that the activator binds to the trypanosomal enzyme at the site in the regulatory subunit to which cAMP binds in PKAs from other eukaryotes. However, the detailed architecture of the binding pocket differs between the two proteins. The differences involve only two or three amino acid substitutions, but these changes suffice to ensure that cAMP no longer fits — while the synthetic alternatives fill the cavity neatly.

With these alternative activators, Boshart and his colleagues now have useful tools at hand with which to probe the function(s) of PKA in the Kinetoplastida and identify the enzyme’s target proteins. In addition, the results are of great interest from the therapeutic point of view. With appropriate modification, the parasite-specific activator could possibly be converted into an inhibitor of the trypanosome’s PKA, without affecting the function of the mammalian host’s enzyme.