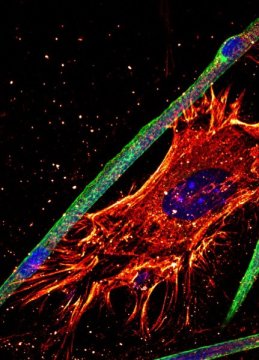 A group of researchers led by Edgar Gomes, Group Leader at Instituto de Medicina Molecular João Lobo Antunes (iMM; Portugal) identifies in muscle cells a new mechanism that activates locally the movement of the nucleus to its correct position. This discovery, published in the scientific journal Developmental Cell, can have important implications in therapeutic strategies to treat muscular diseases.

A hallmark of muscle cells is the unique position of their nuclei at the cellular periphery. In multiple muscle diseases, as a result of aging, sports injuries, or genetic disorders this nuclear positioning fails to occur. Consequently, patients experience a gradual loss of muscle function that leads to a loss of autonomy.

“We have previously shown the molecular mechanisms used by muscle cells to move their own nucleus to the correct position at the periphery of the cell, but we still know very little about how this movement is activated,” says Edgar Gomes, adding that “now, we built up on this mechanism and discovered that another type of cells, the myofibroblasts, contribute to the activation of the nuclear movement.”

“We propose a mechanism by which cells can sense tissue architecture and regulate nuclear positioning in accordance with a local cue. This is of major importance to understand muscle differentiation, functionality and regeneration and might contribute to future therapeutic strategies to treat muscular diseases where the position of the nucleus is impaired,” says Edgar Gomes.

Materials provided by Instituto de Medicina Molecular. Note: Content may be edited for style and length.