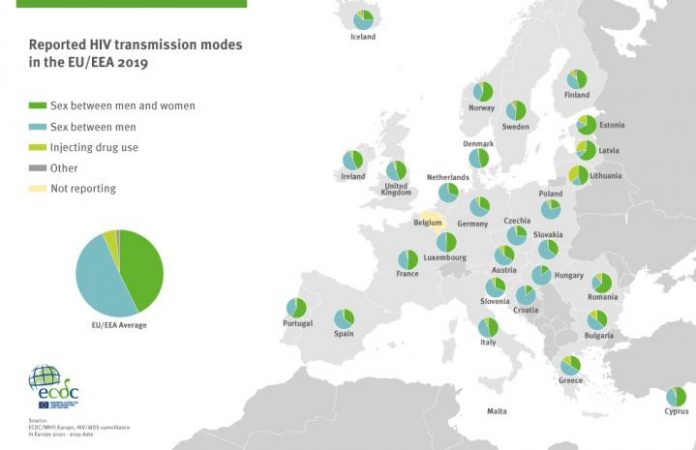 The number of people living with undiagnosed HIV is increasing in the WHO European Region. According to data published today by ECDC and the WHO/Europe, more than 136 000 people were newly diagnosed in 2019 – roughly 20% of these diagnoses were in the EU/EAA and 80% in the eastern part of the European Region.

Every second HIV diagnosis (53%) happens at a late stage of the infection, when the immune system has already started to fail. This is a sign that testing strategies in the Region are not working properly to diagnose HIV early.

The number of people diagnosed with AIDS, the end-stage of an untreated HIV infection, has gone down by more than half in the last decade and the Sustainable Development Goal (SDG) target of ending the AIDS epidemic by 2030 is achievable. However, in the EU/EEA for example, 74% of the 2 772 AIDS diagnoses in 2019 were made very soon after the initial HIV diagnosis – within three months. This shows a significant problem with late diagnosis of HIV infection.

Late diagnosis contributes to ongoing HIV transmission as, often for years at a time, people do not know they have HIV and are not getting treatment.

Although the trend across the Region as a whole has stabilised in recent years, the number of people newly diagnosed with HIV has increased by 16% since 2010. In contrast, the proportion of new diagnoses across EU/EEA countries has declined by 9% over the same period.

The number of newly reported HIV diagnoses and the estimated number of new HIV infections in the whole WHO European Region show that more people have become infected with HIV over the last decade than have been diagnosed, indicating that the number of people living with undiagnosed HIV is increasing in the Region.

In the EU/EEA, the opposite trend has been observed: the number of people living with undiagnosed HIV has been falling.

ECDC Director Dr Andrea Ammon highlights: “Despite the focus on COVID-19 right now, we must not lose sight of other public health issues like HIV. Earlier diagnosis of HIV is an urgent priority. We cannot reach the Sustainable Development Goal target if takes an average of three years for people to find out that they are HIV-positive after infection with the virus. Three years during which live-saving treatment is not available to them and during which they can unknowingly pass on HIV. If we want to reduce the high proportion of people diagnosed late, it is essential to diversify our HIV testing strategies as outlined in the ECDC testing guidance, for example.”

Dr Hans Kluge, WHO Regional Director for Europe, says: “I remember when a diagnosis of HIV seemed like a death sentence. Now, with proper treatment, people with HIV can live without fear of AIDS. These data are from 2019, and the question in 2020 has to be what effect the pandemic will have had on testing by the end of 2021. For now, our message has to be to protect the progress of the last decade by continuing to prioritize HIV testing and getting treatment to those who need it. We cannot allow the pandemic to rob us of an AIDS-free future that is within our grasp.”

The HIV/AIDS surveillance data for 2019 show that the proportion of those who are diagnosed late increases with age.

Across the whole Region, 67% (EU/EEA: 65%) of people aged 50 years and older were diagnosed late in the course of their HIV infection. In 2019, one in five new HIV diagnoses was in a person over 50 years of age.

The reasons for this are not yet fully understood. It may be that older adults themselves, or the healthcare workers looking after them, underestimate the risk of infection. Older adults may be more affected by the stigma associated with the disease and less comfortable asking to be tested.

WHO/Europe and ECDC stress that to reduce the number of future HIV infections, Europe needs to focus on three main areas:

Early diagnosis is important because it allows people to start HIV treatment sooner, which in turn increases their chances of living a long and healthy life and prevents further transmission.

Guidance to improve testing in Europe

In their guidelines, both WHO/Europe and ECDC recommend that HIV testing services include self-testing and community-based testing by lay providers using rapid tests.

Notes to the editor

Late diagnosis is defined as having a CD4 cell count below 350 cells/mm3 blood at the time of diagnosis. This is a measure of the person’s immune system functioning.

The WHO European Region comprises 53 countries, with a population of nearly 900 million people, of which around 508 million live in the EU/EEA (27 EU Member States, the UK plus Iceland, Liechtenstein and Norway).

World AIDS Day was introduced by the World Health Organization (WHO) in 1988 and is observed annually on 1 December to raise awareness of the AIDS pandemic caused by HIV infection.

HIV/AIDS: The human immunodeficiency virus (HIV) is a virus, which attacks the immune system and causes a lifelong severe illness with a long incubation period. The end-stage of the untreated infection, acquired immunodeficiency syndrome (AIDS), results from the destruction of the immune system. AIDS is defined by the presence of one or more “opportunistic” illnesses (other illnesses due to decreased immunity).

In 2014, UNAIDS and partners launched the so-called ’90-90-90 targets’ with the aim for 2020 that 90% people living with HIV are diagnosed (early) and 90% of those diagnosed receive antiretroviral treatment (ART) which leads to viral suppression among 90% of those on such treatment, i.e. the virus is no longer detectable in the blood. Such an undetectable viral load also means that HIV positive people on effective treatment do not transmit the virus. Latest data on progress towards these 90-90-90 across Europe and Central Asia can be found here:
https://www.ecdc.europa.eu/en/publications-data/continuum-hiv-care-monitoring-implementation-dublin-declaration-2018-progress