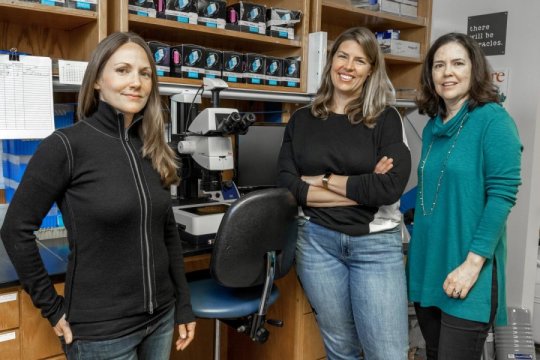 A one-two punch of powerful antibodies may be the best way to stop Ebola virus, reports an international team of scientists in the journal Cell. Their findings suggest new therapies should disable Ebola virus’s infection machinery and spark the patient’s immune system to call in reinforcements.

From 2013-2016, West Africa faced the deadliest Ebola outbreak the world has ever seen. By the time the outbreak was declared over, 11,325 people had died. The VIC is an international group of the world’s leading virologists, immunologists, systems biologists and structural biologists working to stop an outbreak on that scale from ever striking again.

The VIC researchers aim to understand which Ebola-fighting antibodies are best-and why. The hope is that the most effective antibodies can be combined in a therapeutic “cocktail.” Unlike an Ebola vaccine, these cocktails could be given to those already infected, which is important for stopping a disease that tends to emerge unexpectedly in remote locations.

Ollmann Saphire and her colleagues in the VIC have published more than 40 studies in just the last five years. This landmark study is the first-ever side-by-side comparison of 171 antibodies against Ebola virus and other related viruses, known as filoviruses. All antibodies in the panel were donated by different labs around the world, and many had not been previously characterized in such extensive detail.

“Through the VIC, we could test a larger pool of antibodies in parallel, which increased the potential to detect statistically significant relationships between antibody features and protection,” says Saphire. “We used this global pool of antibodies to evaluate, and streamline, the research pipeline itself.”

In addition to identifying links between antibody target locations and activity, VIC researchers tested this huge pool of antibodies to reveal which antibodies “neutralized” the virus, why neutralization assays so often disagree, and whether or not neutralization in test tubes adequately predicted how well these antibodies would protect live animals from Ebola virus infection. Unexpectedly, neutralization alone was not always associated with the protective ability of an antibody.

Notably, the scientists found nine antibodies that protected mice from infection without neutralizing the virus in test tubes. These antibodies likely fight infection by interacting with an infected person’s immune system, helping orchestrate a better immune response to the virus.

This “immune effector” activity is featured in the team’s companion study published simultaneously in Cell Host & Microbe. “The ability to evoke an immune response will likely represent a new avenue of study for therapeutic antibodies for Ebola virus infection,” says Sharon Schendel, project manager for the VIC and science writer in the Saphire lab.

From the large body of results, VIC member and Scripps Research faculty member Kristian Andersen, PhD, and his graduate student Karthik Gangavarapu developed a network describing how each antibody feature correlates to protection, which can serve as a guide to predict whether newly identified antibodies will have therapeutic value. Saphire says the next steps for the VIC are to further test promising antibody cocktails in non-human primates. The team will also pursue engineering of antibodies that carry signature features to better drive immune system response.

The study was supported by the National Institutes of Health’s National Institute of Allergy and Infectious Diseases (grant U19 AI109762). Funding was also provided by NIH grant U19AI135995 and contract HHSN272201400058C, and by Human Therapeutic Monoclonal Antibodies Platform IAF311007.