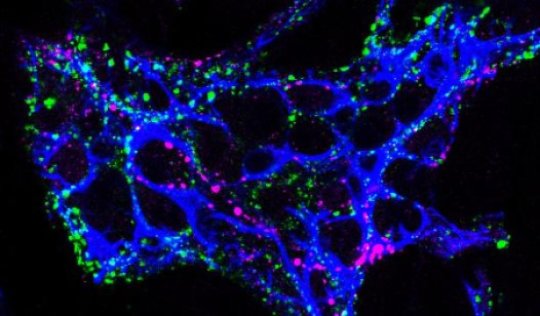 Michigan State University scientists have identified an early cause of intestinal inflammation, one of the first stages of inflammatory bowel disease and irritable bowel syndrome, which afflict around 11 percent of the world’s population.

The discovery, featured in the current issue of Cellular and Molecular Gastroenterology and Hepatology, points to communication between sensory neurons in the gut and a class of non-neuronal cells — enteric glia — as the culprits.

“The gut has its own brain and that has more neurons in the intestines than in the spinal cord. Within your intestines lies a ‘second brain’ called the enteric nervous system,” said Brian Gulbransen, MSU neuroscientist and the study’s senior author. “The enteric nervous system is an exceedingly complex network of neural circuits that programs a diverse array of gut patterns and is responsible for controlling most gastrointestinal functions.”

Accompanying the neurons in this second brain are enteric glia, which are responsible for regulating inflammation. The disruption of neural circuits in the gut by inflammation is considered an important factor in the development of irritable bowel syndrome and inflammatory bowel disease.

The research team pinpointed that before the first hints of intestinal pain or rumblings, specific molecular changes spark the discomfort. Tachykinins, peptides that are keys to pain transmission and intestinal contractions, drive enteric neuroinflammation.

The gut’s major source of tachykinins are enteric neurons. Tachykinins drive neuroinflammation in the gut through a “multicellular cascade” of enteric neurons, bead-like TRPV1-positive nerve fibers and enteric glia.

Gulbransen’s team revealed that glial cells, once thought to be supporting cells, are active signaling cells involved in much of the cross-talk that happens in the gut. The key is isolating a single voice rather than stifling the entire cacophony, Gulbransen said.

“Post inflammation, there are still many angry glial cells. Because they’ve amped up their signaling, they make you, and your gut, more sensitive,” Gulbransen said. “We hope we can turn them back to happy glia, reduce the sensitivity and return gut function to normal.”

One of those single voices — the key to intestinal happiness — is NK2R, a receptor that’s a critical mechanism in driving neuron-to-glia signaling. The team is just starting to understand the genes involved and inventorying what’s being activated and what’s not. But NK2R is proving promising.

“By blocking the receptor with GR 159897, which is a known NK2 receptor antagonist drug, it disconnected the signaling between neurons and glia,” he said. “It proved to be quite effective in accelerating recovery from inflammation.”

This foundation could lead to more targets that could be treated with drugs that would reset the sensitivity of these neurons.