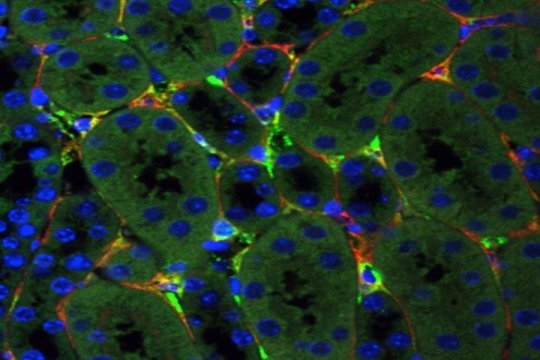 Gene therapy has gained momentum in the past year, following the federal government’s approval of the first such treatments for inherited retinal diseases and hard-to-treat leukemia. Now, research led by Washington University School of Medicine in St. Louis has shown, in mice, that genetic material can be delivered to damaged cells in the kidneys, a key step toward developing gene therapy to treat chronic kidney disease.

The potentially fatal condition affects 30 million Americans, most of whom don’t realize they have chronic kidney disease. No cure exists, and current treatments for end-stage disease mostly are limited to dialysis and kidney transplant. However, the researchers said gene therapy could provide a way to deliver genes that slow or reverse cell damage that leads to chronic kidney disease.

The findings are published July 5 in the Journal of the American Society of Nephrology.

“Chronic kidney disease is an enormous and growing problem,” said senior author Benjamin D. Humphreys, MD, PhD, director of the Division of Nephrology at Washington University. “Unfortunately, over the years, we haven’t developed more effective drugs for the condition, and this reality is leading us to explore gene therapy.”

“Part of the reason there have been so few advances in kidney disease treatment is because the kidney is complex, and we don’t fully understand the disease process,” said Humphreys, the Joseph Friedman Professor of Renal Diseases in Medicine. “However, scientists are making progress, and I am optimistic.”

To that end, Humphreys and his team — including researchers from Harvard University and Massachusetts Institute of Technology — focused on whether adeno-associated virus (AAV), a relative of the virus that causes the common cold, could deliver genetic material to targeted kidney cells. Until now, no such virus has been capable of delivering genetic material to the kidney, and the new research provides a proof of concept for this approach.

The researchers evaluated six AAV viruses, both natural and synthetic, in mice and in stem-cell-derived human kidney organoids. A synthetic virus, Anc80, created by one of the researchers proved successful in reaching two types of cells that contribute to chronic kidney disease; these cells secrete proteins that gum up the organ and cause irreversible damage. The researchers also showed that the genetic material carried by Anc80 was transferred successfully to the targeted kidney cells. That same virus also was used by the researchers in gene therapy strategies to treat mice with kidney scarring.

“This was a happy surprise,” Humphreys said. “We were not expecting this.”

However, Humphreys cautioned that researchers are still early in the process. In future research, scientists will encounter several challenges, such as the need to identify a gene that can extensively correct damaged kidney cells, he explained. Another issue involves refining the boundaries of gene delivery to prevent delivery of the synthetic virus to other organs.

“The interesting thing about the adeno-associated viruses is that they persist in the body for many months, potentially giving a therapeutic gene a chance to do its work,” Humphreys said. “Chronic kidney disease is a slowly progressive disease so that is an advantage. After many more years of research, we could envision that patients would need injections maybe twice a year as opposed to every week, like with chemo.

“There has been so little innovation in kidney treatment,” he said. “We believe this is a positive step forward.”

Materials provided by Washington University in St. Louis. Original written by Kristina Sauerwein. Note: Content may be edited for style and length.