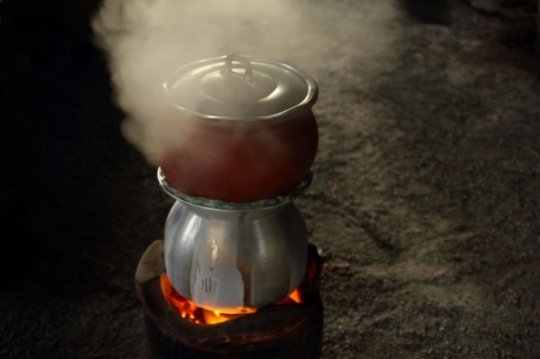 Burning wood or coal to cook food is associated with increased risk of hospitalization or dying from respiratory diseases, according to new research conducted in China and published online in the American Thoracic Society’s American Journal of Respiratory and Critical Care Medicine.

About three billion people around the world live in households that regularly burn wood, coal or other solid fuels to cook their food. Solid fuels emit very high levels of pollutants, especially very small particles that can penetrate deep into the lungs. Typically, these households are found in the rural areas of low- and middle-income countries. Although China is rapidly urbanizing, one third of its population still relies on solid fuels.

In “Solid Fuel Use and Risks of Respiratory Diseases: A Cohort Study of 280,000 Chinese Never-Smokers,” researchers from the Oxford University in the United Kingdom and the Chinese Academy of Medical Sciences report that chronic and acute respiratory disease hospitalizations or deaths were 36 percent higher among those who used wood or coal for cooking compared to those who used electricity or gas.

The researchers also report that the longer people used solid fuels, the higher the risk of hospitalization or death from a respiratory disease than those who cooked with gas or electricity. Those who used wood or coal for 40 years or longer, had a 54 percent higher risk of hospitalization or death from respiratory disease, while those who switched from solid fuels to clean-burning fuels reduced their risk to only 14 percent higher than those who never cooked with wood or coal.

The study reviewed the health records of 280,000 adults, age 30 to 79, in the China Kadoorie Biobank (CKB). The participants were from 10 areas of the country, had never smoked and were free of respiratory and other major chronic diseases when they enrolled in the study. They were followed for nine years. During that time, 19,823 were either hospitalized or died from a major respiratory disease. Of these events, 10,553 were due to asthma or chronic obstructive pulmonary disease (COPD), and 7,324 were due to acute lower respiratory infections, most often pneumonia.

“While many previous studies have suggested a link between solid fuel use and COPD, most of them focused on changes in lung function, rather than hospital admissions or deaths,” said lead author Ka Hung Chan, MSc, a doctoral student at the University of Oxford’s Nuffield Department of Population Health. “In addition, we looked at the associations with other respiratory diseases about which little is known.”

Kin Bong Hubert Lam, PhD, an associate professor at Oxford University who co-led this study, said several factors may explain this, including the fact that COPD is underdiagnosed in China, particularly in rural areas, where spirometry, an essential diagnostic tool in COPD, is rarely available. The weaker association found in their study “could also be due to concurrent exposure to wood or coal smoke among clean fuel users that our study was unable to measure, especially among those who lived in communities where solid fuel use is common,” he added.

According to Zhengming Chen, MBBS, DPhil, senior author and professor of epidemiology at the Nuffield Department of Population Health, the study’s most important finding may be that the increased risk of major respiratory diseases posed by burning wood or coal can be significantly lowered by switching to a clean-burning fuel.

“Although we cannot infer a causal relationship from these observational findings, our findings make a compelling case to speed up the global implementation of universal access to affordable clean energy, one of the United Nations Sustainable Development Goals,” he said.