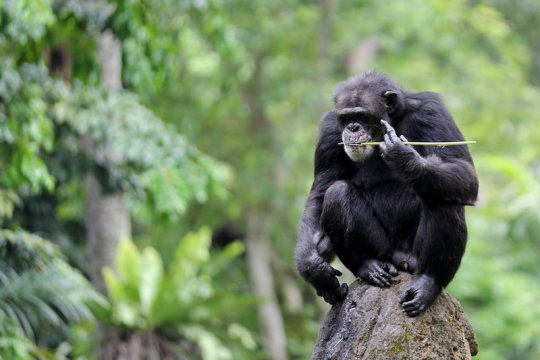 Working memory is central to our mental lives; we use it to add up the cost of our shopping or to remember the beginning of this sentence at its end. Some scientists argue it is particularly developed in humans, but how do chimpanzees, one of our closest relatives, compare? Researchers set out to answer this question.

Previous studies showed that chimpanzees have excellent long-term memory abilities. However, little is known so far about their working memory abilities. To shed light on these abilities researchers presented chimpanzees with a task, in which they could search for food in a number of small, opaque boxes. The chimpanzees first watched how pieces of food were hidden in these boxes. Then the apes could start to search for the food items by pointing at these boxes one by one. If a chosen box contained food, the chimpanzees received this food reward. After each choice, the boxes were covered for 15 seconds.

To retrieve all of the food items chimpanzees needed to keep in mind, which boxes they had already searched for food. The researchers increased the difficulty of the task depending on the ability of each chimpanzee by increasing the number of boxes and by shuffling the boxes between each search. The study revealed key similarities between chimpanzee and human working memory: the best-performing chimpanzees remembered at least four items, one young chimpanzee more than seven items. They used both the appearance of the boxes as well as their position to remember their previous choices.

This study demonstrates that chimpanzees, like humans, possess working memory abilities that allow them to keep track of a series of previous events or actions. Contrary to previous claims, chimpanzees’ working memory capacity does not appear to be fundamentally different from the human capacity. “Our findings suggest that chimpanzees perform similar to seven-year-old children in an intuitive working memory task that does not rely on extensive training,” says Christoph Voelter from the Max Planck Institute for Evolutionary Anthropology and the University of Veterinary Medicine Vienna.