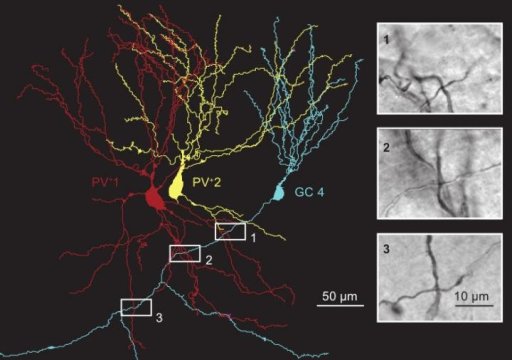 When you park in the office car park, you usually have no problem finding your car again at the end of the day. The next day, you might park a few spots further away. However, in the evening, you find your car, even though the memories of both days are very similar. You find your car (also) because our brains are able to store memories of very similar events as distinct memories in a process called pattern separation. Researchers at the Institute of Science and Technology Austria (IST Austria) are deciphering how the brain computes this pattern separation in a brain region called the dentate gyrus. Results of their work are published today in Nature Communications.

Peter Jonas and his team, including first author and PhD student Claudia Espinoza, Jose Guzman, previously Postdoc in the Jonas group and now Research Associate at IMBA and Xiaomin Zhang, currently Postdoc in the Jonas group sought to understand how the connections between neurons in the dentate gyrus, a part of the hippocampus and the brain region required for pattern separation, allow the dentate gyrus to separate patterns in mice.

In the dentate gyrus, two types of neurons send signals: principal neurons send excitatory signals, while interneurons send inhibitory signals. The researchers sought to decipher the rules of connectivity between them — which neurons send signals to each other, are connections between neurons reciprocal or do many neurons converge to send signals to one main neuron? They recorded signaling between neurons to understand how the neurons are connected and how the local circuit works to support pattern separation. Espinoza performed octuple whole-cell recordings, in which she stimulated one neuron in a slice of the dentate gyrus, and recorded how the other seven neurons respond. By labelling all stimulated neurons, she could then reconstruct the morphology of the circuit.

After the dentate gyrus separates similar memories to avoid an overlap between them, the CA3 region of the hippocampus then stores these memories. In a previous article published in Science in 2016, Peter Jonas and Jose Guzman showed that the connectivity in the CA3 region of the hippocampus is designed to recall information of stored memories in a process called pattern completion. “At a biological level, our group found the connectivity rules that support the computational function of a brain region,” says Espinoza, “Our work contributes to showing how local circuits are optimized for the specific function of a brain area. While the input that reaches the dentate gyrus is important, the way in which the dentate gyrus then computes this information to achieve pattern separation is crucial.”

Claudia Espinoza is a PhD student in the group of Peter Jonas. Before Claudia Espinoza joined IST Austria for her PhD studies in 2013, she worked with patients with neurological disorders. This experience motivated Espinoza to pursue a PhD in neuroscience: “I realized that my work as a therapist was very limited because the treatment that we could offer to our patients was very scarce, and actually most of the available treatments are palliative and not curative. The main reason is that the information available about how the nervous system works is very limited, more than what most people believe. This fact motivated me the most for changing my career from a therapist to a researcher. I think that creating knowledge is a beautiful way of contributing something to our society and indirectly to helping people.” IST Austria’s interdisciplinary graduate school offers fully-funded PhD positions in the natural and mathematical sciences.