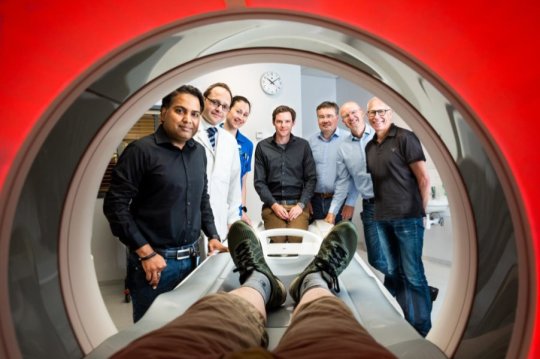 Researchers at Linköping University have for the first time been able to use information from computer tomography images to simulate the heart function of an individual patient. Some of the modelling methods they use have been developed in the motor industry.

Computer tomography systems, also known as CT scanners, are found in most Swedish hospitals. They can be used for a simple investigation to rapidly determine whether a patient has cardiovascular disease — problems with calcification of the blood vessels that supply the heart with oxygen. The investigation is quick, and the patient can go home immediately after.

“The next step, if it is suspected that something is wrong, is a significantly longer and more complicated investigation, where the patient must spend the night in hospital. We have developed a method where we instead use all of the information that we already have from the first investigation. Our method may have major clinical significance,” says Anders Persson, professor in medical imaging and director of the Center for Medical Image Science and Visualization (CMIV).

One person who has played a key role is Jonas Lantz, researcher at the Division of Cardiovascular Medicine and CMIV. He presented his doctoral degree in applied thermodynamics and fluid mechanics at LiU. He has imposing knowledge of the methods used to simulate flowing fluids and turbulence in the aeronautical and motor industries, and their application for flow through human blood vessels. He has used these modelling methods to simulate the blood flow in a patient’s heart, with the aid of the high-resolution images that are produced from the CT scanner. He has used the huge computing power available from the supercomputers at the National Supercomputer Centre (NSC) at LiU.

“This is the first time we have shown that we can simulate the function of the heart in a particular patient. In the future, we won’t need to use supercomputers: the calculations can be done at the CT scanner,” says Matts Karlsson, director of NSC and professor in applied thermodynamics and fluid mechanics.

In order to be certain that the images, which — it must be remembered — are calculated in a computer, agree accurately with reality, the researchers asked a dozen patients whether they were willing to remain for a short time after the CT investigation and undergo a further investigation using magnetic resonance imaging.

“Most of them agreed to the further investigation, and this means that we have been able to compare the calculated images with reality. The images are nearly identical,” says Anders Persson.

Even though only twelve patients took part in the study, the results are so remarkable that an article is being published in the scientific journal Radiology.

Tino Ebbers, professor of cardiovascular medicine, is convinced that the technology will be useful.

“Magnetic resonance cameras are effective, but they are not available everywhere. The investigation is expensive, patients should not have any metal like pacemakers in their body, and the investigation takes quite some time. Since CT scanning is quick and easy, we can reach completely new patient groups. We can now simulate how the heart is functioning in individual patients,” he says.

“We can study the motion of the heart muscle, its physiological condition and its function, while the patient is comfortable at home,” Anders Persson emphasises.

It is no coincidence that LiU researchers present results that require deep knowledge within not only flow patterns and turbulence but also medicine and image processing, using methods that require supercomputers.

“This is a good example of how we manage the infrastructure we have at LiU, with magnetic resonance cameras, computer tomographs and supercomputers. We don’t sit in our own isolated rooms: it’s easy to carry out cross-disciplinary research at LiU. However, at the same time it does need people with a foot in both camps, such as Jonas Lantz, since our methods have been taken from medical research, image processing and applied fluid mechanics,” says Matts Karlsson.