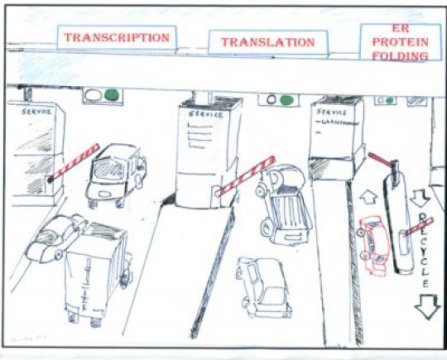 The steps cells take in response to challenges are more complex than previously thought, finds new research published in the journal eLIFE. The study investigates a system relevant to cancer, viral infection, and diabetes as well as Parkinson’s and Lou Gehrig’s disease, revealing many cases of “purposeful inefficiency” in cellular behavior.

These new pathways might offer routes for understanding and perhaps even treating these diseases, the study’s scientists note.

“Surprisingly, cells often take an approach that seems quite inefficient,” explains Christine Vogel, an associate professor at New York University’s Department of Biology and the study’s lead author. “However, discovering these unexpected routes helps us to better understand how an organism responds to a major affliction and, with it, opens entirely new pathways to support the cells in their endeavor and fix the disease.”

Each cell in the human body produces as many as 1.5 million protein molecules every minute — and folding the proteins into their right shape is a vital and enormous task. If too many proteins misfold and accumulate, cellular health is in immediate danger and may eventually cause the cell to die.

For that reason, the “cellular stress response” is central to many human diseases. Misfolded proteins occur in rapidly dividing cancer cells that produce many more protein molecules than normal — or in virus infected cells where the virus hijacks the host’s protein manufacturing machinery.

Therefore, cells develop multiple mechanisms to fight the accumulation of misfolded proteins, to stop the synthesis of proteins, and refold existing ones properly.

Past research has examined these behaviors in isolation. However, recent technological advances allow scientists to study these cellular processes as a whole — and specifically offer a new view on previously undetected relationships and pathways.

Combining multiple cutting-edge techniques and analyses, the researchers examined the response of human cancer cells to misfolded proteins over several hours and from multiple vantage points. They then developed computational tools to integrate these data and extract a signal for each of the thousands of genes they detected at multiple stages in their regulatory journey.

What the scientists discovered was contrary to their expectations.”The normal process to make proteins from genes consists of two major steps, called transcription and translation,” explains Vogel. “If you have misfolded proteins accumulating in the cell, you would think that the first and easiest response should be to shut down these two steps in order to avoid producing even more proteins. And indeed, we observe many genes for which translation stops in response to misfolded molecules in the cell.”

However, the researchers also found a surprising number of very different responses. For example, many genes did not participate in the global translation shutdown, but rather increased the second synthesis step, producing even more protein molecules from these genes. Others did decrease their translation according to the standard model, but, conversely, increased the first step — transcription — rendering a seemingly uneconomical process.

Why the easiest route is often not taken is still subject to speculation, the researchers note.

“The cells are much smarter than just turning everything off under stress, and we have some ideas as to why,” Vogel says. “For some genes, the cells want to be particularly fast in ramping up synthesis when misfolded proteins occur — to support the refolding machinery, for example. To save time, the cell then always conducts the first step for these genes in a somewhat wasteful manner, so that only the second step is left to do when the proteins are needed. For others, the cell activates the genes’ protein production halfway through ‘just in case’ they are needed — and therefore prepares for all eventualities.”

The researchers are now following up on some of these new avenues — and hope that many others will do the same, based on the newly published results. In turn, these future studies may then lead to a better understanding of cellular stress and how to treat it in disease.